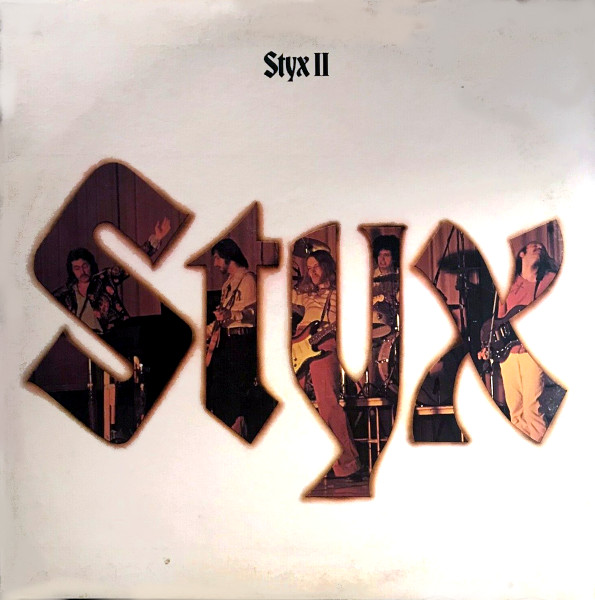 The second album proves that Styx was no fly-by-night band, ironically by sounding a lot like Fly By Night.

Maybe you’ve heard Fly By Night by Rush and, if you have, you’ll know where I’m going with this. The second album from Styx is a statement of purpose. On their first album, their personality only partially emerged. Styx II is the first album where Styx steps up and stands apart. The material is completely original (a Bach fugue and a few seconds of “Strangers in the Night” notwithstanding), the vision too, and the appearance of a certain Lady is the first clear sign that the band is capable of writing a huge hit song.

The record opens with You Need Love, a partially successful attempt to emulate the progressive masters of the day. The band still needs to work on their arrangements, balance their harmonies better and write decent lyrics, but you’ve got to give them a B+ for effort and energy. “Lady” is an altogether different story. The arrangement shifts beautifully from light to dark, the harmonies are heavy but never clumsy and the vocals from Dennis DeYoung are just shy of perfection. Initially, “Lady” didn’t garner much radio play, but the band corrected that error soon after by plugging it with their local Chicago stations, after which point it caught fire and eventually pushed Styx II into Billboard’s Top 20. The second half of side one features two original songs from John Curulewski. A Day is the album’s longest track, a dreamy song that recalls the post-psychedelic West Coast rock sound of Crosby, Stills & Nash and Steve Miller Band. You Better Ask is closer to the Southern rock style of Allman Brothers, a cautionary tale with a sense of humor and some Duane Allman-inspired playing from James Young.

The second side begins with Bach’s Little Fugue in G before launching into the album’s other classic track, Father O.S.A. Inspired by a Catholic priest/teacher that the band knew (“O.S.A.” stands for the Order of St. Augustine), I’d rank this just below Kansas’ “Dust in the Wind” in terms of theosophical songs that totally rock. Earl of Roseland most reminds me of Rush’s second album in its combination of innocence and the excellence to come. There’s a bit of The Who in it, and John Panozzo goes full Moon on the drums. The album’s confident closer, I’m Gonna Make You Feel It, isn’t empty boasting at this point. The keyboards and crushing chorus clearly point to a bright future, and the boys had to be feeling good about what they’d put on tape.

The tug of war between prog and rock isn’t so pronounced this time. Styx II clearly belongs in the prog camp, with James Young’s preference for hard rock contained to a couple of vocals (“You Need Love,” “I’m Gonna Make You Feel It”) and his guitar playing. While the band’s songwriting would sharpen with time, it was pretty clear after Styx II that they wouldn’t be playing other people’s songs anymore. In fact, the challenge would be in finding enough space to accommodate three distinctive songwriters.