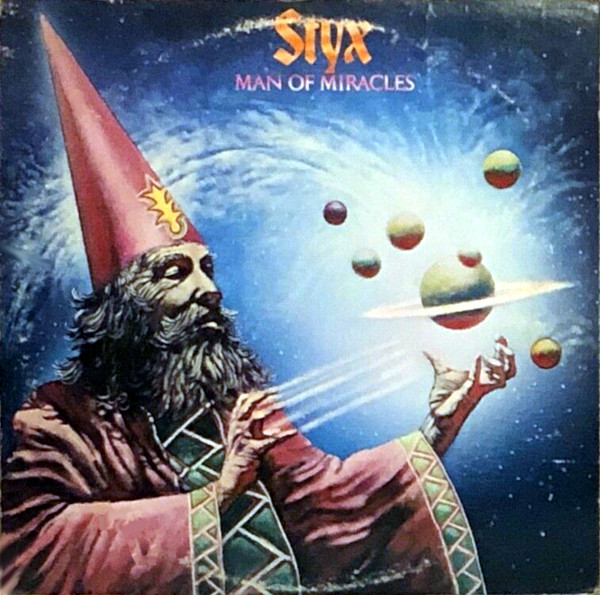 The light and heavy factions of Styx find better balance on the last of the Wooden Nickel recordings.

Finally, a Styx album cover that doesn’t look like it was designed by a high school yearbook committee. And, yes, I realize that’s a snarky start to this Styx review. As a wise man once said about stones and something, words will never hurt.

You might think by the cover that the band was headed in a proggier direction, but they weren’t. Or that Wooden Nickel had loosened the purse strings for better production, which again appears to be a hard no. In fact, Man of Miracles doesn’t even contain what was then the band’s big hit on the radio, “Lady.” Basically, what you’ve got here is The Serpent Is Rising with a better cover.

Honestly, it was a miracle that Styx was allowed to make four albums without a whiff of commercial success. Then “Lady” arrived, the band signed with a major label, Tommy Shaw joined and the rest is rock & roll history. The early Styx albums each have their moments, but they’re very different moments that never form a cohesive story. Here, it’s a few Dennis De Young songs and tracks where James Young’s rock & roll tendencies are tempered by De Young and John Curulewski. As with earlier albums, all signs point to De Young as the band’s direction for the future; the rest of the time, Styx sounds like a generic hard rock band.

The album opens with two rockers from Young and Curulewski. Rock & Roll Feeling isn’t the money shot that someone seemed to think it was, while Havin’ a Ball is actually pretty good. Having established that a) the band loves rock & roll and b) they’re having a great time making said rock & roll, the shift to the proggy, orchestrated “Golden Lark” is unexpected. Although the two sides of Styx were an accepted fact at this point, the separation between the two had rarely felt so jarring. A Song for Suzanne, one of two tracks that I would probably salvage here for a career retrospective (the title track being the other), continues to make the case for De Young as the band’s smartest musical architect, even as the band drops the case in favor of JY’s Allmans fantasies on A Man Like Me.

In its original format, the second side began with a straight-on cover of Lies by The Knickerbockers, which sounds (as it always did) like a Fab Four knockoff. For some strange reason, the label decided to replace that track with an earlier hit for the reissue—not “Lady,” which would have actually made sense, but “Best Thing.” From that point on, Styx finally finds a workable middle ground between De Young’s classical concepts and the band’s hard rock arrangements and heavy choruses. Evil Eyes, Christopher, St. Christopher and Man of Miracles are each ambitious numbers with a nice balance between fantasy and guitar-fueled rock & roll; “Man of Miracles” even kicks up a riff worthy of Black Sabbath. In the middle is Young’s Southern Woman, one of two tracks written with Raymond Brandle, which brings the hard rock/blues guns out a-blazing.

Although it’s not a great album, Man of Miracles might have been with better production. The band clearly has talent and, like Uriah Heep, appeals to both prog and rock audiences. More importantly, Styx finds a better balance on this album by pulling the polar opposites of Young and De Young into more of a groupthink mindset. Had the labels decided to replace “Lies” with “Lady,” this would be the early Styx album to own. Instead, it’s a continuing case of Styx emerging from its chrysalis too slowly, which, for patient progwatchers, may not present a problem.