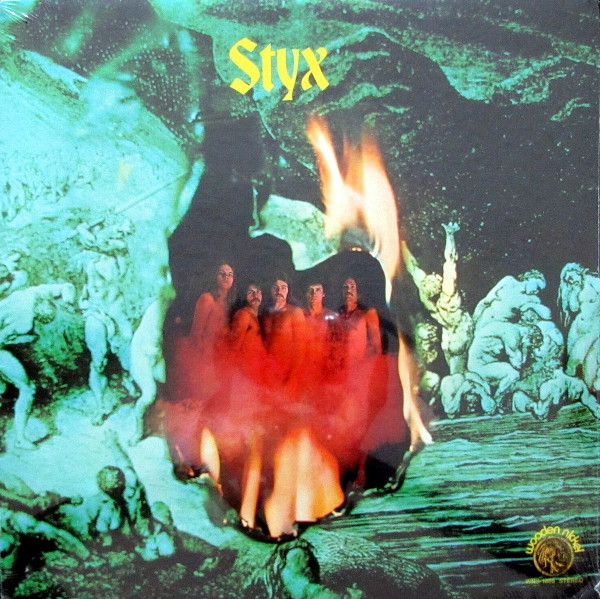 A mix of covers and songs by Styx, I’m just glad they decided to cover their…

According to Greek mythology, those wishing to cross the river Styx had to pay the ferryman a toll, called Charon’s obol. The debut album by Styx is a mix of toil and toll: half an album of original music and half an album of covers selected by the band’s label, Wooden Nickel. Styx (later referred to as Styx I) is best remembered for its ambitious 13-minute opening track and the hard-rocking Best Thing.

Like Kansas after them, Styx was a band divided. On the one hand, you had the hard-rocking ways of James Young (lead guitar/vocals). On the other, the more refined progressive tastes of Dennis DeYoung (keyboards/vocals). The pair reached a truce by divvying up the vocals and solos, but listeners are left to wonder where the band’s true loyalties lie. Is Styx a rock band trying to be a prog band or proggers with a penchant for rocking out? As it turned out, rock and prog remained sides of the same coin over the band’s career, although I was always happiest when they landed on heads.

The band’s opening musical statement is a wonderful mess. Movement for the Common Man roughly shifts gears from hard rock (“Children of the Land”) to street dialogue (“Street Collage”) to a brief rock version of Aaron Copland’s Fanfare for the Common Man (years before ELP, btw) to a Genesis-styled prog piece at the end (“Mother Nature’s Matinee”). Styx clearly has ambitions, but you can see why Wooden Nickel wanted to rein them in with professionally penned songs. The second number, Right Away, is a nearly note-for-note cover of the Head Over Heels songs. The chances are that you’ve never heard of Head Over Heels, and it seems a bit ghoulish that Wooden Nickel would use the charred remains of one aspiring rock group to ignite the career of another.

The second side opens with a song written by Mark Gaddis, who later released a few records under his own name. What Has Come Between Us benefits from the band’s harmonies and a dreamy arrangement that includes a semi-classical intro from DeYoung. “Best Thing,” the album’s other original song, is hands down the best thing on Styx. It’s here that Young and DeYoung strike a good balance, sharing lead vocals and trading solos in a succinct rock song format. Quick Is the Beat of My Heart is as good as it sounds. The band tries to inject some personality into it at the end, but they didn’t have the production team to pull it off. (It’s interesting to speculate how much different this album might have sounded if the band had lucked into a producer like Roy Baker.) After You Leave Me, which re-appeared in 1974 on The George Clinton Band Arrives, is a heavy closer in the blues/hard rock vein.

There are some elements on their first album that clearly point to the future. The high-pitched harmony vocals, for example. The generally excellent guitars, keyboards and drums. But Dennis DeYoung’s emergence as a songwriter on their next album is where the story of Styx gets interesting. The band featured on this album is a hard-rock cover band half the time, an aspiring prog band on the other half. Of minor interest, this album has been released over the years as the band’s fame grew, including a 1980 reissue whose cover defies ready explanation.