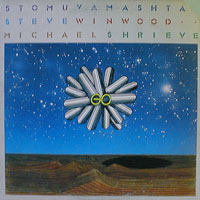 Not a commercial album, though Trafficking in the dark side of the moon might seem that way. And I’m gung ho for Go’s gang: Winwood, Shrieve, Schulze, DiMeola. Stomu Yamashta is a mystery to me, but I admire his vision, sandwiching songs between instrumental interludes that range from modern classical to electronic space music. Whether it’s an album you’ll go to often depends on how much you like tripped-out concepts. If you bought into the artier excursions of Santana (e.g., Caravanserai), then you should consider adding Go to your itinerary of quasi-mystical journeys. There are also some parallels here to the work of Alan Parsons Project (natch) and Camel (specifically The Snow Goose). Winwood fans might feel out of place here, however. For them, there may be too many loose ends to unravel and too few songs like “Crossing The Line” and “Winner/Loser” to cling to. Some of the looseness stems from an unwieldy outfit; if you can find common ground between Al DiMeola and Klaus Schulze, give yourself a gold star. To my mind, I see this as an example of felicitous freelancing on the part of Winwood, as he’s clearly the biggest commercial draw in this collaborative venture. Compared to Blind Faith (diluted Cream) or latter-day Traffic (a dinosaur writhing in tar), this is an elevated outlet for Winwood. Of course, Stomu Yamashta deserves the lion’s share of the credit; it’s his baby, with Steve and Shrieve serving as godparents. Since the original elpee lacks liner notes, putting it all together is out of my grasp. Some critics have apparently uncovered deep truths in the music, but not me. It’s four thirty in the morning, Go has been going since two, and the amount of mystery swirling in the house is no more or less than you’d distill during Santana’s instrumental invocations. Still, if your tastes lean toward proggy, heady concepts, you’ll come to appreciate Go before long.

All songs composed and arranged by Stomu Yamashta unless noted. Lyrics by Michael Quartermain.