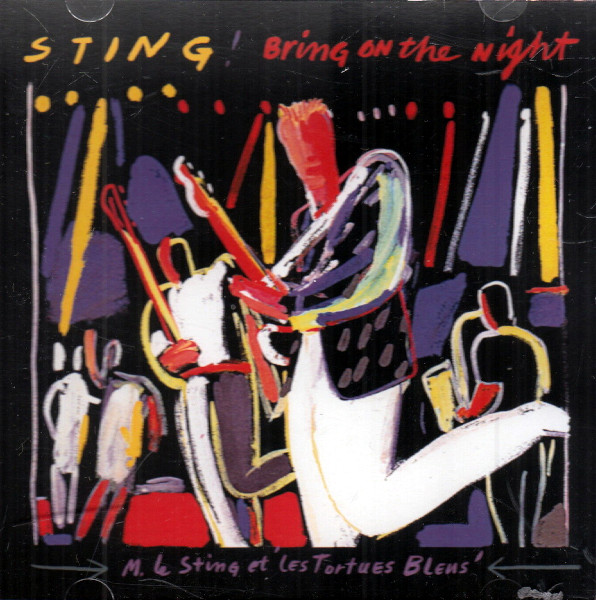 Kronomyth 2.0: The late show with Sting.

With one solo album under his belt, Sting decided to mount a world tour. And film the making of the tour for a movie. And release a double album of the tour, mostly from shows in Paris. What’s the French word for pretentious? Ah, yes, Sting.

I am, of course, kidding. Sting is highly intelligent, talented, et cetera, and none of that has changed. He is not, however, a very good guitar player. And so the lion’s share of carrying the stage performances on Bring on the Night falls to the crackerjack jazz band behind him: Branford Marsalis, Kenny Kirkland, Omar Hakim and Darryl Jones. And that’s where the kronomyth comes in. Bring on the Night sounds like Sting with one of those Late Show bands behind him.

The Dream of the Blue Turtles played up Sting’s jazzy side. (Interesting Sting fact: Before The Police, he played in a jazz band.) Bring on the Night isn’t jazz, despite the presence of top-tier jazz musicians, it’s jazzish. Yes, I need to find a better word for that. But you know those Late Show bands have some serious chops, and you’ll have the same impression here. Kenny Kirkland’s solo on When the World Is Running Down You Make the Best of What’s Still Around makes plain just how good this band is right out of the gate.

So, what to make of Sting’s first live album? For one thing, it’s interesting to hear him interpret the songs of The Police. They lack the drive and energy of the originals, but Sting uncovers some hidden nuances in them that make the exercise worthwhile (e.g., Driven to Tears). And then there are the Sting songs you’ve never heard before: Bring on the Night*, Low Life, I Burn for You, Another Day. Even Police fans will enjoy hearing these.

Bring on the Night’s crowning achievement, however, is the bringing to life of the songs from The Dream of the Blue Turtles. Consider Me Gone, Moon Over Bourbon Street, We Work the Black Seam, Children’s Crusade… they sound even better than the originals. Another surprise is a blues cover, Down So Long, that gives Eric Clapton a run for his money. At least in my opinion, although I’m hardly a blues connoisseur.

Look, Bring on the Night wouldn’t make anyone’s Top 500 list. I’m not even sure it would make Sting’s Top 5 albums. But it may be the best live album that Sting has ever released and that’s, um… actually I thought I had more than that.

*Or forgotten that you’ve heard before because your mind is getting soft.