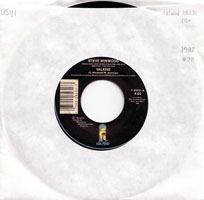 Kronomyth 5.01: VALERIEMIX. So, in the pitiable pantomime that constitutes my life, I find that the left channel of my phono input has opted out of the little menage a trois I had going between us and the wireless headphones, so I’m pretty sure what I listened to this morning was the right channel of the remixed version of “Valerie” simulated over two channels through the technological magic of the “surround” button on my headphones. You would think that the tiny demons in this world would accord me four minutes of stereo in recognition of the countless pinpricks I suffer throughout the day, from scratchy pantspocket-lining to a refuse company that consistently (if fittingly) refuses to open any container that doesn’t have a clearly marked sign saying “garbage” or “recycle” on it (because, apparently, people like to put angry badgers and other live animals in the company’s clearly marked containers at the edge of their yard), but apparently I was four minutes of Steve Winwood in simulated stereo shy of serving out my full, infernal punishment this week. That diabolical diatribe behind us, what we have here is the remixed version of “Valerie” that appeared on the Chronicles compilation, plus the instrumental version of the remixed version of “Talking Back To The Night” that appeared on the same compilation (all of the TBTTN tracks were remixed for Chronicles, since Winwood and most everybody else didn’t like the original mix of the album). Truly, the remixes consisted of little more than some extra electronic percussion, with the sum effect of sounding crisper than the originals. Tom Lord-Alge, that noble laureate of post-production, gets the credit for the remixes, although calling this version of “Valerie” a remix (which the single does not do) would be overselling the difference; “re-produced” is probably the better word, although it’s already gainfully employed as meaning something entirely different. The remixed version of “Talking Back To The Night” is more noticeably new and improved (“Now with 50% more saxophone!”). Yes, I realize that’s a pretty high whining-to-Winwood ratio, but that’s what you get for clicking on a drab, little post without a proper picture sleeve.

Original 12-inch and CD single
1. Valerie
2. Talking Back To The Night (Instrumental)
3. The Finer Things

The Players
Mixed by Tom Lord-Alge.