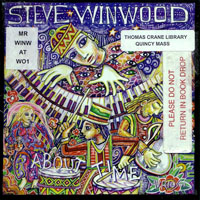 Kronomyth 10.0: BETTER LATIN THAN NEVER. I usually mix Cream, Traffic and Santana together at some point, but in the case of Winwood rarely and not since his first solo album (“Luck’s In”). The cover of About Time looks like a Santana album. Turns out it sounds like one too. Joined by Brazilian guitarist Jose Neto and Santana drummer/percussionist Walfredo Reyes Jr., Steve Winwood is back behind his Hammond and back on top of his game. The post-High Life albums were generally listless, though by most accounts Junction Seven was a departure from formula. About Time is a new journey (for Winwood) into Latin music, during which he rediscovers the musical passion missing from most of his albums. As he sings on the opening song (“Different Light”), “I had overlooked a part of me,” presumably the part that embraced change and experimentation over comfort and control. This album celebrates its return. The sounds literally leap off the disc, and never do I recall that Hammond so clear and commanding. Honestly, I felt Winwood and Phil Collins had both lapsed into ennui, and all but counted them out of the game. What I didn’t count on was Winwood making an album this vibrant and engaging. It may not have produced a hit single (blame the six-year span or lack of a major-label push), but there’s a lot on here to like: “Different Light,” “Final Hour,” “Phoenix Rising,” “Walking On.” Also included is a cover of Timmy Thomas’ “Why Can’t We Live Together,” which had been covered earlier by Santana. Cynics might see this as a fashionably late Latin vacation, but I for one am glad to be back in a world where the question “What will Steve Winwood do next?” isn’t so easily answered.