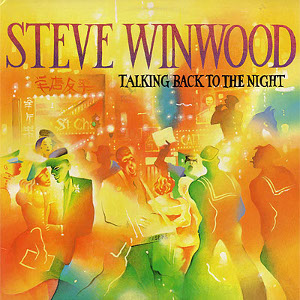 Kronomyth 3.0: DIVER DOWN. Steve Winwood writes soulful, romantic synthesizer pop. I write progressive rock reviews. Not exactly a match made in heaven, so when I tell you that this is a second Arc, bear in mind that I wasn’t exactly on board with the first one. Talking Back To The Night does contain the perennial hit “Valerie” and a couple of near-misses (“Talking Back To The Night,” “Help Me Angel”), but writing a few good songs every couple of years just isn’t going to cut it with me. This is, after all, Steve Winwood we’re talking about. The man is a rock legend, and rock legends don’t get to write songs like “Still In The Game” or “While There’s A Candle Burning” without somebody like me carping. Talking Back To The Night is too little, too light and too much like his last album. Also, somebody needs to punch Will Jennings in the kidney. She was like jazz on a summer’s day? Seriously, how many maxipads do you have to buy for your girlfriend before you come up with that line? Of course, writing songs at the feverish pace of four of five a year, a few clunkers were bound to slip in. With nine new songs, I’m surprised they didn’t make this a double album. Honestly, I think Winwood got lucky with Arc; that was basically a boring synth pop album with two great songs on it. Talking Back To The Night only has the one great song, so it’s twice as boring as Arc. Even Winwood seemed bored by it all, slipping back into semi-retirement for four years before giving the world something to really talk about with his next album.

All songs written by Steve Winwood and Will Jennings.