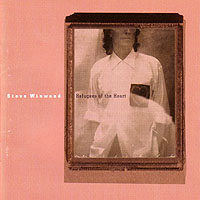 Just what I needed: ten framed photos of Steve Winwood. It’s as close as Refugees of the Heart comes to being a work of art. Despite criticism to the contrary, I don’t hear where this is any better or any worse than Roll With It. I’d tell you that Winwood sounds here like he’s on auto cruise, but he always sounds like he’s on auto cruise. You have the pristine arrangements, the warm and emotive mumbling, the sense that you’re hearing a hybrid of Peter Gabriel and Daryl Hall after too many wine coolers. The hit is “One And Only Man,” cowritten with Jim Capaldi and featuring an instrumental workout for Steve. It’s no more and no less ferocious than Eric Clapton’s crossover love songs, which is something of an achievement for Winwood. The remaining songs are ballads (“I Will Be Here”), adult pop songs (“You’ll Keep On Searching”) and slightly funky entries (“Another Deal Goes Down”). The closing “In The Light of Day,” featuring the sort of intoxicating keyboard pattern last seen in “San Jacinto,” brings home the vision of Winwood as a sort of Peter Gabriel lite. Since Winwood arrived in the same place musically as Gabriel at the same time (Back In The High Life and So were both released in 1986), it’s not a question of Winwood following anyone. This is what he does: write love songs that make good use of synthesizers and employ a minimal groove from time to time. Maybe the formula was growing tired. After a string of platinum and multiplatinum albums, Refugees merely went gold. For this reason, Refugees often gets lumped in with the inferior Talking Back To The Night despite being a better record. It’ll find a home with Winwood fans, hits or no hits, simply because soulful adult pop songs like these are at the heart of Winwood’s appeal.

All songs written by Steve Winwood and Will Jennings unless noted.