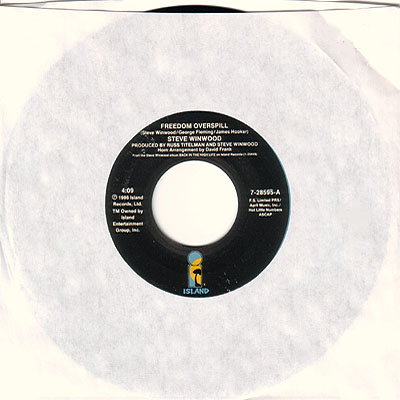 The second single from High Life and, yeah, it basically sounds like “Superstition,” but let’s just agree it’s wonderfull.

Kronomyth 4.2: Liberty, equality and just this.

This was the second of High Life’s bounty to spill over into listener’s laps, again adopting the wise approach of pulling the B side from previous works. (I say “wise” because there was no telling how many of High Life’s tracks had the potential to become singles on their own.) As with the songs of Peter Gabriel’s So, “Freedom Overspill” mixes soul, funk and pop into a tasty treat, this time suggesting a slowed-down version of Stevie Wonder’s “Superstition.” The flip side, “Help Me Angel,” is the same as the version that appeared on Talking Back To The Night. In the UK, “Spanish Dancer” (from Arc) got the nod on the back side.

Several versions of the A side (liberty mix, dub mix) exist. The Liberty Mix is actually a lot of fun; I’ve linked to it below* in lieu of the official video for “Freedom Overspill,” which apparently we’re not at liberty to share (not that I’m complaining, since copyrighted material has no business being on YouTube or any other commercial site that’s not paying the artists or at least the record companies that bamboozled the artists out of the rights to their own works). I believe the 4:09 version is edited; I’ll confirm that later**.

* So, after my little rant, I unlinked it.
**And without my even noticing it, later became now. Yes, it is an edited version. And now, onward to future laters!