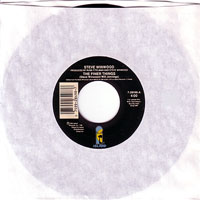 Kronomyth 4.3: MORE FINERY. Six months after the release of Back In The High Life, Island chose to release the title track as the third single in the UK and, in the US, “The Finer Things.” (The title track would be released in the US four months later as the final single from High Life.) “The Finer Things” is simply one of the finest things he’s done on the synthesizer, avoiding the cold remoteness of synthesizer-driven songs before and after by injecting an irrepressible chorus and deliberately quirky rhythm into the song. Although High Life wasn’t as obviously influenced by African pop music as Peter Gabriel’s So or Paul Simon’s Graceland, the vibe of Highlife is just under the surface of “The Finer Things.” For the single, an edited version of the song was released at an even four minutes which tightens up the song considerably (gone is the long, moody intro and the meandering middle section). The B side is an instrumental version of “Night Train”—possibly the same instrumental version that graced the original backside of the Night Train single in 1981. Winwood has often included instrumental versions as the flipsides to singles; collectively, they represent his contribution to muzak, and hold little interest for fans.