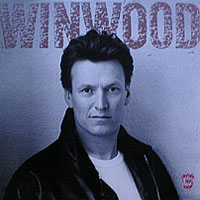 Kronomyth 6.0: ROLLING IN IT. Winwood had been on a roll since BITHL. He had gone on tour, divorced his wife, won just about every meaningful Grammy, re-married, became a father, dumped Island for a shiny new multimillion-dollar contract with Virgin, turned 40 and topped the charts with another multiplatinum record, Roll With It. All the while maintaining that he didn’t feel the pressure to make a big hit record with Roll With It, which is likely a lot of hokum. Whether you believe him or not, Roll With It is the very modern model of a big hit record complete with all the trimmings including, this time, the Memphis Horns. The opening title track, which nicks Junior Walker’s “(I’m A) Roadrunner” (original songwriters Lamont Dozier, Brian Holland and Eddie Holland were later given a credit on the song) kicks the album off on a grand note. That track, “Holding On” and “Don’t You Know What The Night Can Do” gave Winwood three more big hits and continued to make him an 80s radio mainstay. Yet the album is in many ways an artistic step back from BITHL, favoring synthetic white soul over the exotic and uplifting music of his last record. Strip away the gloss provided by the hired studio hands and this is Talking Back To The Night part two. Of course, Virgin wasn’t paying him $12-$13 million to make an artistic statement; they wanted hits and they got what they paid for here. And so will you, provided you’re not expecting more than those three hits and a handful of warm ballads and pop songs delivered in the cool contrivance of late 80s studio frankensteinery popularized by Phil Collins, Howard Jones and others.

All songs written by Steve Winwood and Will Jennings unless noted.