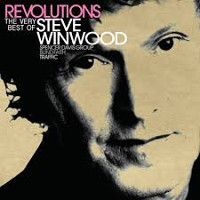 Kronomyth 13.1: THE VERY BEST OF STEVE, WINNOWED. Someone at Island had the very good idea to release a four-disc retrospective of Steve Winwood’s career in various guises including Spencer Davis Group, Blind Faith and Traffic. In 1995. It was called The Finer Things, and by most accounts it was one of them. Fifteen years later, the wheel of creativity came full circle at Island and someone else had the identical idea. Unfortunately, that someone must have an evil twin who came into work the next day and suggested that Island also release a single-disc version of the same retrospective featuring different songs, because obviously there’s not enough confusion or Steve Winwood product in the world. For example, you won’t find “Roll With It,” “Finer Things” (guitars have been added, an article subtracted) or the new radio edit version of “Spanish Dancer” (acoustic guitars replace the synthesizers) on the four-disc set, I guess because it would have meant fewer songs from When The Eagle Flies. This IS the best single-disc selection of Steve Winwood I’ve ever heard, so I’m not really griping. I would have made a few different choices, swapped “Empty Pages” for “Glad” and “Shanghai Noodle Factory” for “No Face, No Name, No Number” mayhaps, but it’s unlikely that any two people could agree on Steve Winwood’s best seventeen tracks (or be so hard-pressed for something to do to even try). Presented in nearly chronological order (Blind Faith’s Can’t Find My Way Home” is oddly out of place), this compilation is a thumbs-up thumbing through of Winwood’s storied career. I recall reading something about a special remastering for this edition, which may or may not have involved the blood of virgins and the position of the moon. Whatever they did, it does sound good. If you’re looking for a single-disc dose of Winwood, Revolutions is a much better bet to please than the earlier Chronicles. If you’re looking for a four-disc set from Winwood, you’re probably looking too hard, since it’s not like they’re rare or anything.