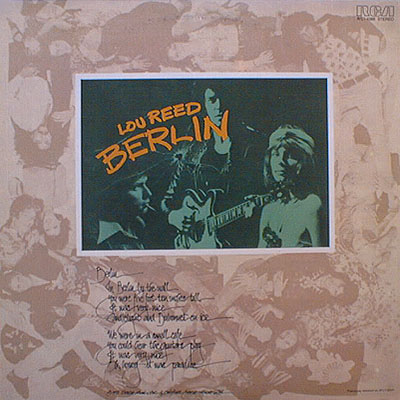 Reed recycles some old bits into a brilliant concept album about domestic abuse, produced by the king of the concept album, Bob Ezrin.

If Lou Reed’s earlier songs were a slap in the face, Berlin was a punch in the stomach. Produced and arranged by the conceptual/theatrical Bob Ezrin, Reed’s third album is a concept album that chronicles an abusive relationship between Jim and Caroline that ends, um, badly. There are no heroes here, no winners, only losers.

Reed had given us many glimpses into troubled lives over the years, but Berlin is one long, unblinking stare at a tragedy that unfolds before our eyes and ears. Transformer smoothed out Reed’s rough edges. Berlin elevates them into spires on a great black cathedral for lost souls, resulting in his darkest work to date. The genius of Berlin is that it’s compiled largely from leftover pieces. “Berlin” had appeared in a brighter version on Lou Reed’s first album. “Oh, Jim,” “Caroline Says II” and “Men of Good Fortune” have their origins in the Velvet Underground. And yet Berlin moves seamlessly from honeymoon to hell and back again, as if it were stitched to a pattern. Ezrin has since stated his attraction to “heavy” themes, and the second side of Berlin is unbearably heavy. But Berlin is also one of Reed’s most musical albums, featuring strings, choirs and complex arrangements. The idea of staging Reed’s bleak narratives would seem crazy at first glance; crazy like a wolf and foxy, it turns out.

Over the years, Reed’s tale of doomed lovers has grown in stature as new generations scale its formidable wall of pain. In 2006, Reed performed the album in its entirety for a handful of shows in New York, which became the basis for a film directed by Julian Schnabel. A nice bit of recycling, that; Andy would have been proud.

All songs written by Lou Reed. Arranged by Bob Ezrin.