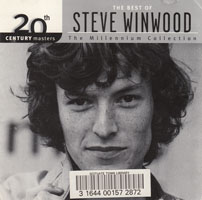 Kronomyth 9.5: STUCK IN TRAFFIC. The new millenium apparently has no use for a Steve Winwood solo album. The whole Millenium Collection series was just a misguided attempt by Island/Universal to make some money with budget-priced compilations; not as lame as BMG’s Extended Versions series, mind you, but also well shy of the bar set by Hip-O’s Gold series. This Steve Winwood disc is lamer than most because it does not contain a single Steve Winwood solo recording. Instead, it compiles work from Steve’s pre-solo affiliations: Spencer Davis, Blind Faith and Traffic. In the unlikely event that there exists a person who has purchased every Steve Winwood solo album but owns not a drop of Traffic or Blind Faith, then this album is for them, and its discovery will no doubt be greeted with the epiphany: “Bah, I have wasted my life on fluff and piffle!” The choices here aren’t bad, and might have made a nice introduction to a double-disc Best of Steve Winwood disc, but Island is apparently compilationally challenged where Steve Winwood is concerned, having opted earlier for a fearsome four-disc set that even a fan would find daunting. If you’re looking for a good single-disc compilation of Steve Winwood the solo artist, stick with Chronicles. Those looking for a single-disc summation of Winwood before and after (but oddly absent of) his first solo disc may be interested in 2010’s Revolutions, although I would tell you there’s too much missing from both sides of the story to make Revolutions an interesting spin.