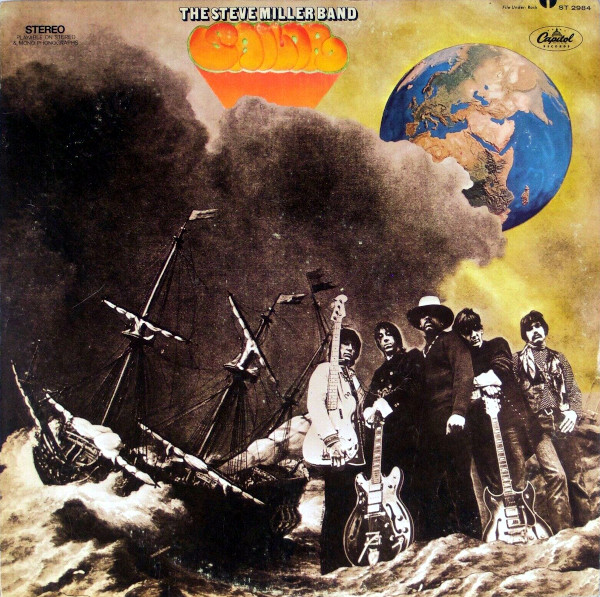 The band’s second voyage is smoother sailing through the fields of psychedelic pop and blues.

Kronomyth 2.0: A concept album that sailed over my head.

Bits of The Beatles, Bob Dylan and Rolling Stones slip their way into the mix on The Steve Miller Band’s second album, Sailor. Despite being released only about six months after their first album, the band clearly had no trouble coming up with more (and, frankly, better) material. Everyone but Lonnie Turner gets a turn at the microphone, which keeps the sound fresh from track to track, moving effortlessly between psychedelic pop and the blues.

Children of the Future was ambitious, but I never heard the Sgt. Pepper’s comparisons that others have. To me, it sounded like one of those early albums by The Mothers that parodied the psychedelic scene with its short attention span. Sailor isn’t so easily buffeted by the winds of circumstance. The opening instrumental (one of the best intros to any album and a harbinger of things to come) evokes the sea, while the last track reference’s a sailor’s dream. That’s not enough to make it a concept album in my book, but more thought seems to have gone into making Sailor a cohesive listening experience.

The band’s second album produced their first hit, sort of, with “Living in the U.S.A.,” which is one of those timeless blues-rock numbers from the late 60s, like Spencer Davis Group’s “Gimme Some Lovin’.” Although it ends side one on a high note, the songs before it are hardly forgettable. “Dear Mary” does a cute job of replicating The Beatles’ “For No One,” including horns at the end, while Tim Davis proves himself a decent singer (if not lyricist) on the catchy “My Friend.”

Side two starts with the slightly unfinished but charming “Quicksilver Girl” and gives Jim Peterman a moment to shine on “Lucky Man.” The aborted “Gangster of Love” would have felt at home on their first album, but their cover of Jimmy Reed’s “You’re So Fine” is honest and authentic. The last two tracks, both from Boz Scaggs, suggest the second songwriter in the band was on a Stones jones. “Overdrive” suggests Bob Dylan and the Stones mixed together, which is as good as you’d think, and “Dime-A-Dance Romance” nicks the riff from “Jumpin’ Jack Flash” with enough panache to pull it off. (That’s right, I actually used the word “panache” in a music review. I have no shame.)

Smooth sailing from start to finish, this and Brave New World are the early Steve Miller Band albums I enjoy most. In 1973, this was re-released under the title Living in the U.S.A.  I suspect that some of these early repackages were meant to generate royalties for the original members.