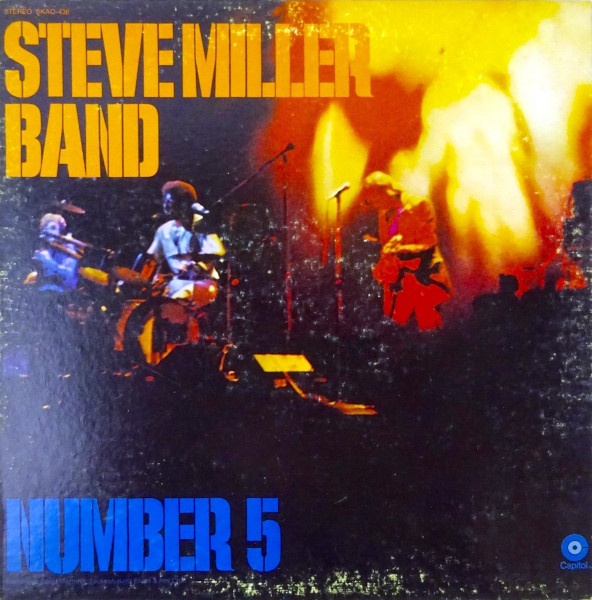 Yeah, I know, lame cover and title, but I’d number it among his better albums.

The band’s cleverly titled fifth album more or less repeats the formula of their last, Your Saving Grace, although for some reason I enjoy Number 5 more. Maybe it’s the strong opening trio of tracks, beginning with new bass player Bobby Winkelman’s Beatlesque Good Morning, Miller’s psychedelic acoustic I Love You and the California country-rock of Going to the Country, one of several tracks to feature Charlie McCoy on harmonica. Or it could be the lush production, this time credited to the band, which includes contributions from a wide host of session players.

The album again features two tracks from the departing Tim Davis, the humorous Hot Chili and the slightly more philosophical Tokin’s. Although Steve Miller has since overshadowed the group, they were faithful to the band aesthetic in the beginning. Ultimately, however, the songs succeed or fail based on Miller’s guitar playing and vocals. He may indeed be a troubadour (as he confesses on Industrial Military Complex Hex), but he’ll always be a guitar-slingin’, smooth-singin’ space cowboy to me.

The second side is mostly blues-rock, highlighted by Jackson-Kent Blues, which feels like a bad trip. Going to Mexico and “Industrial Military Complex Hex” belong with his best blues-rock numbers, Steve Miller’s Midnight Tango is a dreamy departure, and the record ends with an anti-war song, Never Kill Another Man. It’s a bit eclectic, but that would describe most Steve Miller Band albums up to this point.

Despite the absence of a hit single, Number 5 is a solid album featuring some surprisingly good production from the band. Recorded in Nashville, it appears to be a collection of different sessions featuring a rotating lineup around the core of Miller, Davis and Winkleman. It’s a fun record to spin through and may be the most underrated album they’ve made. It’s too bad audiophiles didn’t take an interest in this album, since the production warrants a proper remaster.