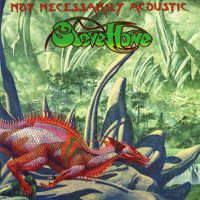 Kronomyth 5.0: THE SOUND OF TWO HANDS CLAP-ING. After the release of The Grand Scheme of Things, Steve Howe had a much more intimate scheme in mind, taking up a one-man, multi-guitar tour of smaller venues. Not Necessarily Acoustic captures his performances in Philadelphia (Theatre of the Living Arts) and Montreal (Café Campus) in December 1993. For Steve Howe fans, it was Christmas come early as the Yes guitarist thumbed (and pinkied and index-fingered) his way through a storied catalog that included “The Clap,” “Mood For A Day,” “Masquerade,” “Ram,” “Meadow Rag,” “Roundabout” and a medley from Tales From Topographic Oceans (which, unfortunately, manages to shed no new light on that inscrutable opus). Despite some occasional, soft singing, this is an instrumental performance—a showcase, really, for the guitarist. Now, you might be thinking, do I really have the stamina for 60 minutes of mostly acoustic guitar? And the answer is, not surprisingly, Yes. Remember how “The Clap” or “Mood For Day” seemed to end too soon? It turns out that Howe has an unquenchable quiver of ideas, and we have an unquenchable thirst to hear them. Instead of building a setlist from his recorded works, which he could have handily done, Howe mixes in a lot of material that would have been new to listeners, such as the “Country Mix” medley, “Dorothy,” “Second Initial” and “Heritage.” The result is a deeper look at an artist that we thought we’d studied from every possible angle already. Cynical eyes may see this as Howe cashing in on the Unplugged phenomenon, but these performances are more about getting to the heart of Howe’s appeal as an artist. His past turns in the spotlight have always featured the acoustic guitar, and it makes perfect sense that, for an entire evening in the spotlight, he would do the same. Because of the new material and the quality of the performances, Not Necessarily Acoustic is definitely essential Steve Howe. It is a live recording, so you’ll have to tolerate that one dingbat at every concert who goes “whoo yeah” at the end of every song as if they’d just accomplished something themselves, but you can either ignore that or take solace in the knowledge that the person doing that probably has an eternity of being followed by a small demon who shouts “whoo yeah” at every action, no matter how small, waiting for them.

The Players
Produced by Steve Howe.

The Pictures
Paintings, logos and graphics by Roger Dean.