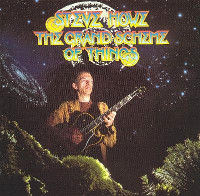 Kronomyth 4.0: GRAND DAD. For the first time in ages, Steve Howe wasn’t a member of a group. Yes was off doing their own thing, Asia too, so Howe formed his own group with sons Dylan (drums) and Virgil (piano) and released an album of new material, The Grand Scheme of Things, before embarking on his first solo tour. His fourth album is an even mix of songs and instrumentals, not unlike what Turbulence would have sounded like if Steve had added vocals to those ideas. The instrumental pieces on Grand Scheme lean more toward the new age side of things: “Road To One’s Self,” “Wayward Course,” “Georgia’s Theme.” The songs aren’t far removed from Steve’s contributions to Yes and Asia. As a producer, Steve favors a more personal and homespun sound, and his vocals are less painful than I remember. There’s clearly a connection between these songs and what Steve might have contributed to a second ABWH album, but instead of complex, multipart suites, these are self-contained songs and instrumentals with surprisingly simple and melodic sensibilities. In the hands of Yes, for example, “Beautiful Ideas,” “The Grand Scheme of Things,” “At The Gates of the New World” or the instrumental “Passing Phase” might have flourished. Here, they’re pleasant reminders that Steve Howe still has plenty of gas left in his creative tank, and if he plans on using it for a family road trip, that’s fine with me. I’d still recommend his first two solo albums to Yes fans, but Grand Scheme is a better bet to please than Turbulence and an auspicious enough beginning to the next phase of his career as a solo artist.