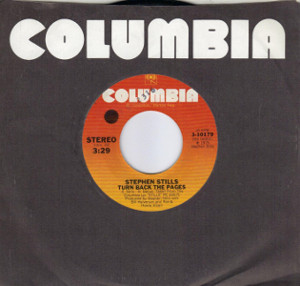 If anyone has interesting pages to turn back to, it’s Stephen Stills, but this single suggests his best music really is behind him.

Kronomyth 5.1: WHO HAS TIME FOR REPETITIOUS PAGES? This was the first and only single released from Stephen Stills’ new album for Columbia Records, titled simply Stills. Once again, it was the album’s lead track, following a long-standing tradition of putting his best musical foot forward. It’s also one of two tracks co-credited to new guitarist Donnie Dacus. In this case, it sounds as though Stills and Dacus fused two different songs together, since the main verses and chorus have a completely different tempo and feel, and the lyrics don’t jibe. As a result of this, I’ve never been clear on what this song is about; maybe a reference to a soured friendship? I couldn’t tell you with any certainty which half belongs to Stills and which to Dacus. The lyrics throughout the main verses sound like Stills, but so does the Latin-themed music in the chorus. At any rate, the song didn’t capture the attention of radio listeners for nearly as long, and quickly dropped off the charts. The version that appears on the single is edited, with chunks of the second chorus and third verse cut out and a shorter fadeout.

Turn it on again.
The song’s title has always had a nostalgic quality, even if the lyrics don’t bear it out. When CSN toured in 1977, “Turn Back The Pages” was included in the group’s concert set. The harmonies from Crosby and Nash replaced the vocal harmony from Marcy Levy (who did an amazing job on the original). Twenty years later, CSN featured the song again in their 1996 tour, although at that point age had robbed their voices of their original luster. Some years later, a compilation of Stills’ Columbia recordings (including his early Super Session recordings) was packaged under the name Turnin’ Back The Pages. Of minor interest, the myriad song lyrics sites that popped up on the Internet years ago (and seem to continue to skirt copyright issues for the most part) have quite a few errors. I remember thinking at the time that the poor people who did the data entry for those sites had the most miserable job on earth. That is, until I started writing reviews that no one reads for free. On a brighter note, the B side is the album track “Shuffle Just As Bad,” which is some of the better blues this side of Eric Clapton.