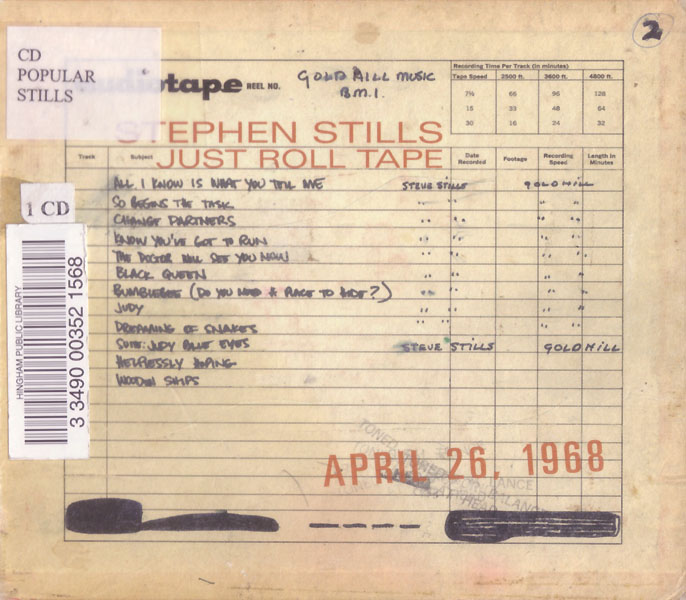 For Stephen Stills fans, this is the holy grail of super sessions: a 1968 demo tape preserved in fine condition featuring the young songwriter pouring out his new songs prior to the Buffalo breakup. Here you’ll find early versions of classics like “Wooden Ships,” “Helplessly Hoping,” “Suite: Judy Blue Eyes,” “Change Partners” and “Black Queen.” And then there are tracks you’ve never heard before but that outshine most of his album filler from the 70s: “All I Know Is What You Tell Me,” “Dreaming of Snakes,” “The Doctor Will See You Now.” Just Roll Tape is just Stills singing in that smokey, sometimes slightly cracking voice, picking and strumming with his acoustic guitar. The songs were recorded after a Judy Collins session and feature two songs written specifically for her, including “Suite: Judy Blue Eyes” in a version nearly identical to the CS&N version (only the harmonies and the closing section are missing). “Wooden Ships” and “Helplessly Hoping” are also very close to their final form; in fact, I prefer Stills’ version of “Helplessly Hoping” to the treacly CS&N treatment. Nearly forty years had passed between the recording and release of these songs, and to hear them now for the first time is like stepping back through history and observing a great moment in the making. I haven’t felt this kind of a connection with Stills in a long time, and I suspect most fans will feel the same way. This is easily one of the best archival releases I’ve heard in a while, and possibly the best Stills album since his first.

The Songs
1. All I Know Is What You Tell Me
2. So Begins The Task
3. Change Partners
4.  Know You’ve Got To Run
5. The Doctor Will See You Now
6. Black Queen
7. Bumblebee (Do You Need A Place To Hide?)
8. Judy
9. Dreaming of Snakes
10. Suite: Judy Blue Eyes
11. Helplessly Hoping
12. Wooden Ships (David Crosby/Stephen Stills/Paul Kantner)
13. Treetop Flyer

All selections written by Stephen Stills unless noted.

The Pictures
Art direction and design by Maria Villar. Photos by Graham Nash.