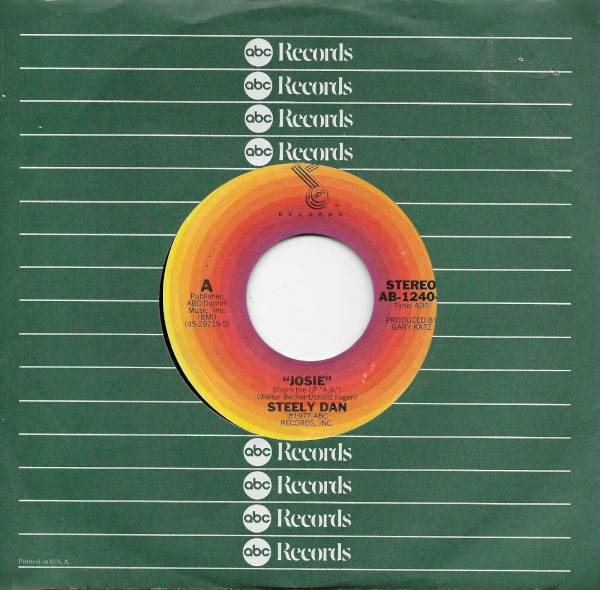 Almost a year after the release of Aja, ABC Records released Josie as a single in North America. (In Europe, “Josie” had served as the B side to “Deacon Blues.”) Ordinarily, a song like “Josie” would be earmarked as the advance single but, as you know, Aja was no ordinary album. The single version is identical to the elpee version; you don’t mess with perfection.

Two things worth noting about this song: the drumming from Jim Keltner and the guitar solos from Walter Becker. Keltner has always been something of a low-key drummer, but he nearly steals the show on “Josie” with his impossibly tight drumming. This might be the best Keltner performance I’ve ever heard. Becker’s solos are the polar opposite: understated, almost invisible.

The B side is Black Cow, a song that garnered enough radio play to qualify this as a double single. In fact, I was a bit shocked to learn that “Black Cow” was never released as one. Kudos to the FM radio programmers for flipping this one over. Again, the single and elpee versions are identical. Years later, “Black Cow” was sampled for the rap song, “Déjà vu (Uptown Baby).” Becker and Donald Fagen charged $115,000 for the sample rights, and I’m pretty sure I should get some of that money for having had to listen to that song.

“Josie” and “Black Cow” are part of what I’ve always considered Steely Dan’s exotic singles. This would include “Rikki Don’t Lose That Number,” “Do It Again” and “Kid Charlemagne.” As a kid, I was intrigued by them but always had something of an arm’s distance relationship with them. It was much easier to embrace a song like “Peg,” “My Old School” or “Reeling in the Years” because it was rooted at least partially in pop/rock music. The exotic singles had a jazz club feel that barred my childish mind from entry, and I always felt like I had my ear pressed against the door, stealing forbidden sounds.

That has always been part of the appeal of Steely Dan for me. It’s the music behind the bead string curtain, the gateway to illicit mysteries, the section where shadowy figures enter never to return. “Josie” and “Black Cow” felt like that as a kid and still do today, which is, I suspect, something at the very heart of rock and roll.