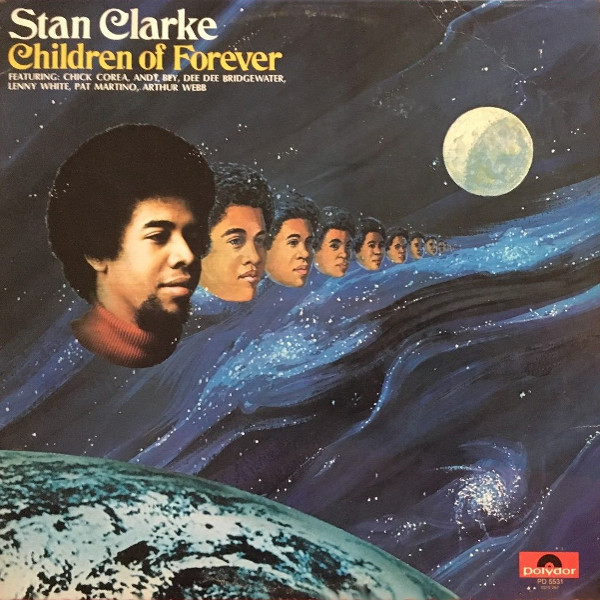 Stan’s first is a light as a feather in his cap featuring fusion mixed with soul.

Kronomyth 1.0: Son of the Return to Forever.

The first solo album from Stanley Clarke is an RTF record in all but name; a Light As A Feather in his cap, if you will. It’s a transitional record, featuring vocals and flute (holdovers from the last RTF album) while looking forward to the future quartet of Clarke, Chick Corea, Lenny White and electric guitar (here provided by Pat Martino).

Andy Bey and Dee Dee Bridgewater create an interesting male/female dynamic in the vocals that gives Children of Forever a unique flavor among RTF-related albums, almost like Frank Zappa at times (“Children of Forever,” for example, always reminds me of Frank’s “Village of the Sun”). Children of Forever is both a collaboration between Clarke and Corea and an inversion of their previous roles, with Clarke writing all but one track, lyricist Neville Potter providing the spacey/spiritual subject matter and Corea handling the arrangements to keep everything contained within the RTF universe. The one track arranged by Clarke, “Children of the Future,” begins to fall apart in the middle and suggests that Corea was the stronger arranger of the two (the rest of the album bears that out). “Unexpected Days” shows the difference in their styles, and has a much more sophisticated and languid feel with no trace of funk.

Speaking of sophistication, “Butterfly Dreams,” the only track to feature Bey without Bridgewater, could have come from the smooth-as-butter Johnny Hartman himself. On those tracks and the longer “Sea Journey,” it feels as though Corea has hijacked the session, and this may be the only complaint that Clarke fans can level against the album: it’s not a true Stanley Clarke solo album in the same sense as a School Days. As a warm run for the next iteration of RTF, however, Children of Forever is a welcome find for fusion fans and one of the better examples of Corea’s music in a song-oriented form. It’s not the bass showcase I expected, except for the brilliant “Bass Folk Song” and a wild bass fiddle solo on “Sea Journey,” nor is the guitar fully integrated into their sound yet (Pat Martino’s lone solo on “Sea Journey” is more notey than notable). All in all, not quite as amazing as LAAF, Hymn or the Di Meola-era discs (in my opinion), but it’s definitely in the same family.