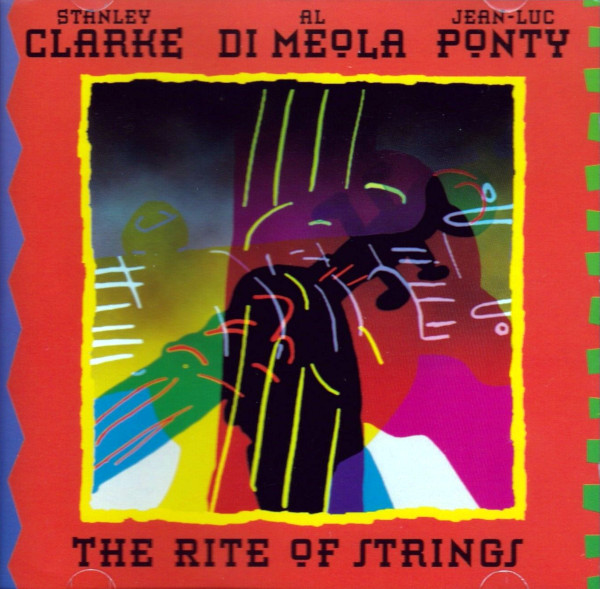 An alignment of fusion stars, unplugged, that sort of picks up where Di Meola, De Lucia and McLaughlin left off.

Kronomyth 18.0: Three is a magic number.

Jazz musicians, it turns out, need to eat and pay their electricity bills like the rest of us. This by way of saying that such a momentous meeting might have been motivated in part by money. Whatever the reason, audiences who showed up to see Stanley Clarke, Al Di Meola and Jean-Luc Ponty play together as an acoustic trio certainly got their money’s worth. Clarke and Di Meola, well, they’ve been together since forever, but the pair had never played with Ponty until a 1994 appearance in Montreux. There must have been something magical about the experience, since they soon decided to join forces for a tour in the summer of 1995, during which they sat down to record this album.

The Rite of Strings features three compositions from each musician, several of them unique to this disc including “La Cancion de Sofia” and “Memory Canyon.” Similar to Di Meola’s earlier, popular trio with John McLaughlin and Paco De Lucia, this is an acoustic experience (Di Meola does use some effects to emulate a flute, poorly) but one that fusion fans will warm to quicker than bebop purists. Clarke, Di Meola and Ponty collectively have close to one hundred discs to their name, and it’s unlikely you’ll own all of them, but you really should make an effort to own The Rite of Strings. Because it represents the kind of cosmic alignment that happens too infrequently in our lifetimes. Because it produces words like fragrant, pungent and rich that want to leap from the tip of your tongue and tell the world. Because three of the world’s greatest living jazz musicians have thrown caution and egos to the wind in the pursuit of something beautiful and new, and the least you can do is throw ten bucks their way to share in the experience.