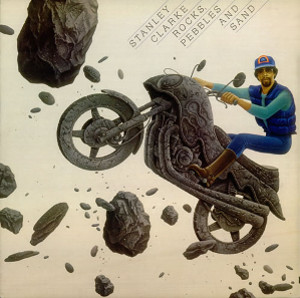 Jazz/rock, funk and soul are the main ingredients for Stanley’s seventh solo foray.

Stanley seems to be inching slowly toward mainstream R&B with each album. The man likes to sing, and has a decent voice, although he’s still a little too spread out stylistically to win over the fusion or funk camps entirely. Highlights this time include a space funk adventure with Chick Corea (“Underestimation”), the soulful “You/Me Together” featuring Marcy Levy (late of Eric Clapton’s employ) on vocals and the suite (if slightly indigestible) “The Story of A Man And A Woman.” Those last two tracks feature a substantial string section in tow, while Clarke calls in Michael Jackson’s Off The Wall-bangers for the rudimentary funk single, “We Supply.”

Like Modern Man before it, Rocks, Pebbles And Sand is a mixed bag. I prefer the fusion and can do without the funk. As for the vocal songs, they work some of the time; the opening “Danger Street,” for example, reminded me of John Lennon, an artist I don’t readily associate with Stanley Clarke.

Modern Man and Rocks are two albums that do many things well, none of them exceptionally well. I can tell you that some of the subsequent straight-up R&B albums are pretty awful, although I think jazz in general collectively cringed in the 80s as fusion players pursued funk and disco as a way to cash in on their chops. This album at least rocks some of the time and continues to make a case that the words “singer/songwriter” belong somewhere after the title of world’s greatest bass guitarist.

A1. Danger Street
A2. All Hell Broke Loose
A3. Rocks, Pebbles And Sand
A4. Underestimation
B1. You/Me Together
B2. We Supply (Stanley Clarke/Louis Johnson)
B3. The Story of A Man And A Woman
Part 1: She Thought I Was Stanley Clarke
Part 2: A Fool Again (Stanley Clarke/Monica Francine Pege)
Part 3: I Nearly Went Crazy (Until I Realized What Had Occurred)

All songs written by Stanley Clarke unless noted.