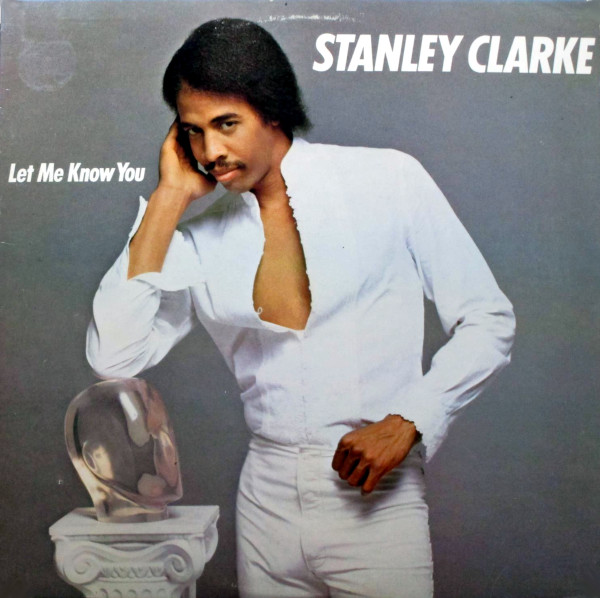 Eventually, the many-tentacled monster known as disco sucked in Stanley Clarke, resulting in this album.

This is one book you can judge by its cover. Let Me Know You is Stanley Clarke’s first full-time foray into disco music, and while the Chick Corea-styled costume changes have been interesting to date, not so Know. To his credit, Clarke does a very passable job of singing these songs, it’s just a shame he didn’t give himself something better to sing. For example: “My girl, sophisticated is her name / Woh-oh-oh / Yea! She’s a lady.” That’s from the opening song, “Straight To The Top,” and it’s downhill from there.

With its undercurrent of funk, LMKY sometimes sounds like an imitation of Prince, but you won’t find anything revolutionary at work here. Only the closing “New York City” (which namechecks Miles Davis) reflects the mind of a serious artist; otherwise, Clarke seems content to throw his hat into the romantic R&B ring without so much as a passing nod to his old jazz-rock roots. As with Herbie Hancock and other jazz artists in the 80s, Clarke’s disco is a cut above the competition in terms of musicianship. Carlos Santana (who appeared on Hancock’s equally misshapen Monster) kicks in a quick pair of guitar solos, while Denzil Miller leads a large cast that includes some familiar faces (Leon “Ndugu” Chancler, Paulinho Da Costa, Marcy Levy, Greg Phillinganes).

Perhaps you see disco as a legitimate medium for music (and I’m not saying you shouldn’t), in which case Clarke serves it up medium well on Let Me Know You. If, however, disco doesn’t ring your bell, you can wait to make the acquaintance of this album until some dull and distant day.

All titles by Stanley Clarke unless noted.