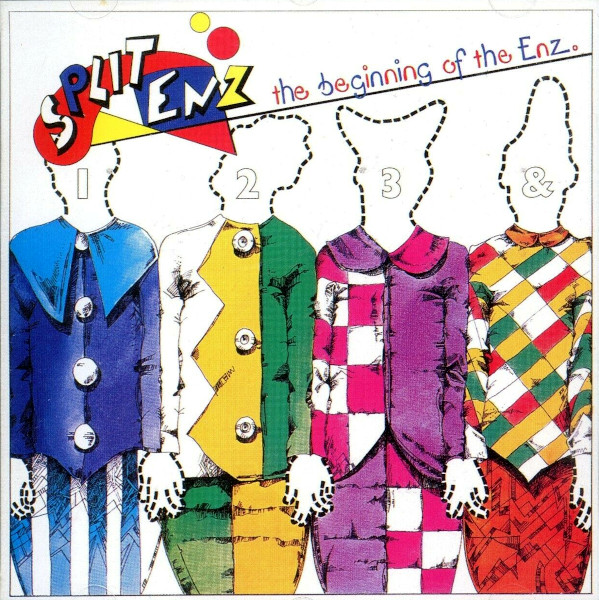 A collection of early singles and unreleased studio tracks, available down under for those who would relive history all over.

Kronomyth 4.5: The ones before and after one two nine.

This is a prequel to the band’s first album, Mental Notes, covering the years 1973 to 1974 with a few singles and early studio tracks, not to be confused with Beginning of the Enz released in the UK the following year, which doesn’t have the The (the word, not the band) and is a compilation of tracks from their first two albums. If you’re still with me after that sentence, you’re exactly the sort of fan who would appreciate The Beginning of the Enz.

The beginning of Split Enz actually starts with Split Ends, the group’s original name. This lineup, which included a flute and violin player (Mike Howard and Miles Golding, respectively), released their first single, For You b/w Split Ends in 1973. Both songs sound noticeably different than the music of Mental Notes, primarily due to the prominence of the flute and fiddle. That the band is unique is already evident, but where they were headed was anyone’s guess. The second single, Sweet Talking Spoon Song b/w One Two Nine, includes what could be considered their first “classic” track in the B side. Later versions of “129,” which morphed into “Matinee Idyll” for Second Thoughts, were good, but the original single version remains my favorite.

The group’s third single, No Bother to Me b/w Home Sweet Home, marks the re-christening of Split Enz with a Z. The recording quality of these songs, oddly, isn’t up to the standards of the first two singles, which is a shame since they’re interesting ideas, especially the tale of the deaf boy Martin on “Home Sweet Home.” The second side features four songs recorded in 1974 (which included “No Bother to Me”) and are notable for the addition of Eddie Rayner. Rayner makes an immediate impression and broadens the band’s sound considerably. Malmsbury Villa is a clever game of wordplay from Phil Judd (sung by Tim Finn) that recalls Genesis and is the first time I can recall hearing the band use a synthesizer. The original version of Lovey Dovey lacks the frenetic pacing of the later version recorded for Mental Notes. The closing Spellbound, given a radically different treatment on Second Thoughts, here sounds like a lost 70s tv theme.

Split Enz were such an original band that any morsel from their past is worth reheating in the microwave of time. The Beginning of the Enz finds the band’s theatrical tendencies already in full force, although the arrangements would crystallize with time. It’s a bit tricky to track down as an import, but fans will be rewarded for their effort.