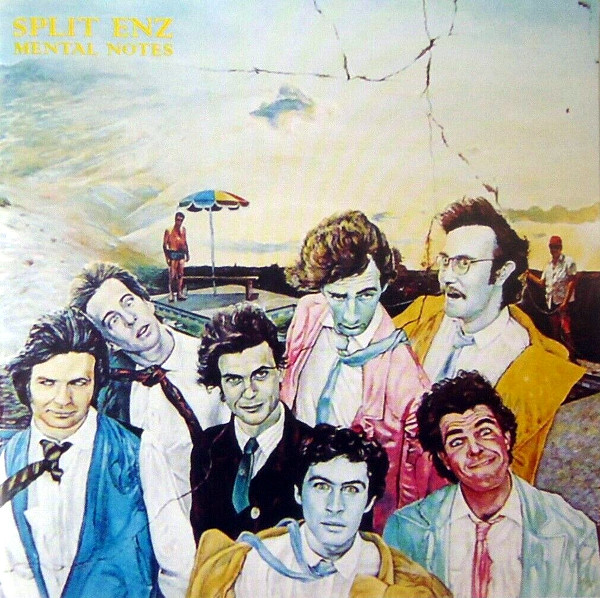 The band’s debut gives new meaning to the words “I know what I like in your wardrobe.”

This is one of the most fearless debut albums you’ll ever hear. Imagine vintage Genesis at their proggiest mixed with the compressed-snake-in-a-can surprises of 10cc and you’ll have some idea of what you’re walking into. Then toss in smart literary references to Herman Hesse (Under the Wheel) and Mervyn Peake (Titus) to make the point that these art-rockers take their art seriously. It’s a shame that founding member Phil Judd pulled a Syd Barrett on the band and split, because the sky might have been the limit for a band like this.

Honestly, this record should come with an advisory label that says something to the effect of “the sounds you’re about to hear are not the result of a defect in the recording process but are a true representation of the artists’ intent.” Or maybe they could put it in tiny print on the back of the album. I’m just spit-balling here. The point is that the band’s strangeness is calculated, incubated, orchestrated; understanding that is the key to enjoying it.

Mental Notes is also a bit maddening. Tim Finn has a lovely voice. Phil Judd sounds like a talking goat on acid. The group happens upon some truly lovely and majestic melodies, then quickly drops them in favor of the next shiny object. Weird sounds intrude into the happy lands like gremlins (e.g., Maybe). Half the time, I have the distinct impression that the band is trying to sabotage their own success.

The album opens with Walking Down a Road, which stops and starts, a broken carnival ride of art rock filtered through a kaleidoscope of candied sounds. Genesis can be glimpsed through the rushing scenery, even moreso on “Under the Wheel” where the colors of Foxtrot have curdled in the mind and mouth of Judd. The song would seem to take its inspiration from Hesse’s Beneath the Wheel, a novel that affected me a lot when I read it as a young man of sixteen. Amy (Darling) is a delightfully tuneful romp with a bit of countryside charm, a synthesizer solo and anything else that the band felt like throwing into the mix. So Long for Now continues to toss away musical ideas like candy wrappers, some with the sweetness still stuck to them.

The second side starts off with a tantalizing melody before disappearing into a cloud of weirdness as the gremlins take over on Stranger Than Fiction. It’s as clear a window into the band’s uncertain mental and musical state as anything on the album and would have made for a fitting album title. The song segues into Time for a Change, the kind of moving ballad that Split Enz would perfect over the years (“Stuff and Nonsense,” “The Devil You Know”). “Maybe” would have been my choice for the single, every bit as delicious as “Counting Out Time” but much stranger, which counts for something. “Titus” is based on the Peake character and features Judd on mandolin. It might have been a sweet song if Tim Finn had sung the whole thing, but Judd’s vocals ensure that the idea is undone before it starts. The closing Spellbound is both a taste of things to come (in its instrumental beginning) and a reminder of the band’s weirder tendencies. Mental Notes is just a bit of extra insanity at the end, in case you’d forgotten.

As with seemingly all things down under and/or down under and over to the right, Mental Notes was remixed and re-released. I’ll never understand that. The reworked songs were released as Second Thoughts and, confusingly, as Mental Notes but with a modified cover in the US. For the new cover, Judd updated the hairstyles for himself and Tim Finn and added Robert Gillies’ head in place of Wally Wilkinson.

All songs written by Phil Judd/Tim Finn unless noted.

Released on elpee, cassette and 8-track in Australia and New Zealand (Mushroom, L/C/T-35588) with gatefold cover.