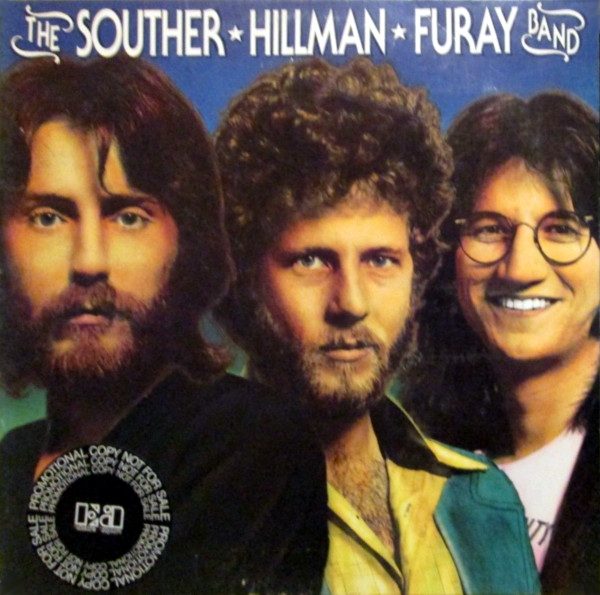 Spare parts from Eagles, Flying Burrito Brothers and Poco are cobbled together in this poor man’s Crosby, Stills and Nash.

The Souther-Hillman-Furay Band was conceived as a country-rock supergroup featuring up-and-coming singer/songwriter J.D. Souther (Eagles), Chris Hillman (Byrds/Burritos) and Richie Furay (Buffalo Springfield/Poco). Time would soon prove it to be an unnatural alliance, but not before the group left behind two albums of competent country-rock in the popular vein of Eagles, Poco and Steve Miller Band. Given good promotion, their maiden voyage together became a Top 20 record and spawned several singles including Richie Furay’s “Fallin’ In Love” and Chris Hillman’s “Safe At Home.”

These days, no one talks about the SHF Band anymore. It was a corporate move, a pot luck stew of minor stars and studio studs (Jim Gordon, Paul Harris, Al Perkins) that delivered the goods but didn’t give anyone chills. If you were looking for a supergroup with a cumbersome name (or just collecting albums with terrible covers), I’d point you to McGuinn, Clark & Hillman first, since that album had real hits and history behind it.

The personalities of Souther, Hillman and Furay never mesh on record, which in retrospect was part of the problem. This isn’t a band but three separate songwriters taking turns at the microphone; even the harmonies don’t click. As you dig deeper into the caves of country-rock, you’ll strike upon this record eventually, and there’s no harm done if you keep digging. For your troubles, you’ll get ten solid tracks that stack up well with the music these artists were making on their own (Down The Road, Slippin’ Away, Black Rose). I’ve always enjoyed Souther’s funkier cuts on here (“Border Town,” “The Heartbreaker”) and Furay’s “Believe Me,” for example. For the further adventures of SHF minus S and F, check out Hillman’s Slippin’ Away, which otherwise features the same backing band.