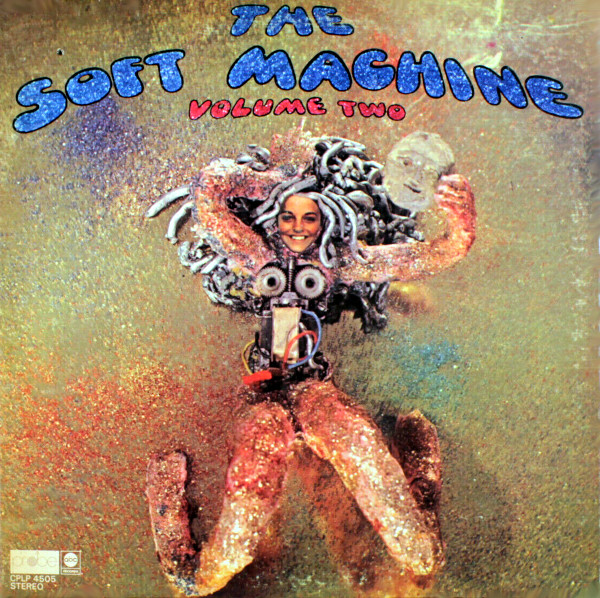 The second installment of their psychedelic jazz circus and first to feature fuzz-bass extraordinaire Hugh Hopper.

The Soft Machine’s second album finds the band working in the context of larger constructs—in this case, two side-long suites called “Rivmic Melodies” and “Esther’s Nose Job”—that were broken into smaller pieces at the suggestion (I’ve read somewhere) of Frank Zappa. In many ways, this record feels like a meeting between The Mothers of Invention and Bonzo Dog Band. Dadaist principles prevail, but they’re presented with a self-deprecating sense of humor, so that the music is both charming and alarming.

While Volume Two may well be their best foot forward, it also presents their Achilles heel: volatility. The (friendly) departure of Kevin Ayers opened the door for the return of Hugh Hopper, whose aggressive fuzz-bass gives the material a much (and perhaps much-needed) darker edge. Over the years, The Soft Machine would morph into a jazz fusion outfit as Mike Ratledge inherited control of the group. You’ll hear the beginning of that transformation on the second side (e.g., “Orange Skin Food”), where tight keyboard patterns and tilted saxophones create a skewed sort of punk jazz. Hopper, however, seems happy to meddle in both worlds, contributing jazzy bass lines one moment, and writing delightfully dadaist songs like “Hulloder” and “Dedicated To You But You Weren’t Listening” the next.

The genius of early Soft Machine was their ability to be both sophisticated and vulgar, serious and silly, without being disingenuous. Frank Zappa’s humor was laced with bitter sarcasm, Bonzo Dog Band was a comedy troupe of troubadours, but The Soft Machine was intelligent (in a musical sense) and innocent (in a social/political sense). Where else, for example, will you find such a sweet tune as “As Long As He Lies Perfectly Still” written for a bandmember who just exited the band, or the alphabet sung without a trace of irony? Their music may have been confrontational, but you won’t encounter anything so sharply worded as “Harry, You’re a Beast/What’s the Ugliest Part of Your Body?”

As impressive as Volume Two is, I don’t believe it to be a timeless work of genius, nor do I find it to be a highly influential work. Even its own members didn’t seem that committed to carrying on with this kind of music. Volume Two is a product of the times, the audible offspring of a unique assembly of like-minded but ultimately individual artists, three amigos on a sonic adventure through the rabbit hole. Some of the broken ground from the first two volumes was picked up for later Soft Machine records, on the solo works of Kevin Ayers and Robert Wyatt, in Gong, et cetera (i.e., the Canterbury scene), yet it never took root in the rest of rock & roll, remaining in its native soil until it withered along with the rest of the progressive movement.

You could, I suppose, build a monument for the machine from “As Long As He Lies Perfectly Still,” “Dedicated To You But You Weren’t Listening,” “Hibou, Anemone and Bear” and all the clever bits in between; diehard dadaists have done just that. There is, however, more than a little improvisation in the music that keeps me from calling this calculated art of the highest order. Volume Two didn’t change my world like We’re Only In It For The Money or The White Album, although it did expand my world and for that, Soft Machine, I thank you.