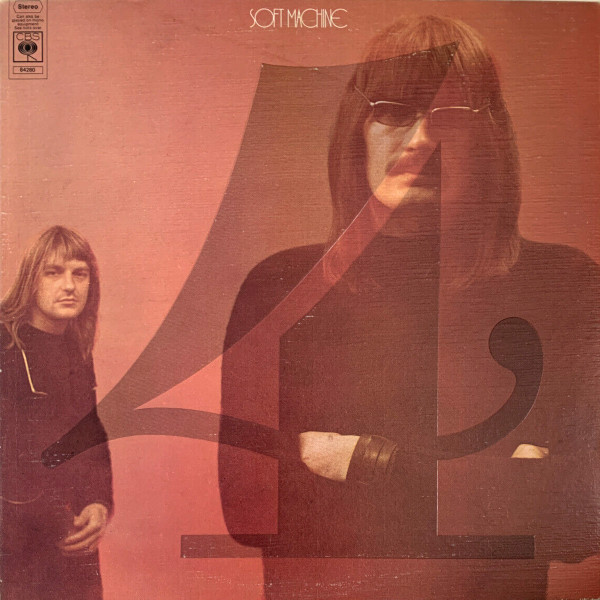 The purely instrumental Fourth, and last to feature Robert Wyatt, contains longer and shorter works in the same vein as Third.

Kronomyth 4.0: The fourth of no moon in July.

The band’s fourth picks up where Third left off and drops Robert Wyatt’s vocals along the way, their metamorphosis into an avant-garde jazz-fusion outfit now complete. The other notable change here is the decision to parcel their instrumental music into smaller packages, although whether the four-part “Virtually” is actually one song or four is debatable (should anyone feel inclined to debate the point). Otherwise, this is very much Third Part 2, and will please fans who enjoyed the expanded horn lineup on their last record.

Mike Ratledge is only credited with writing one song for the album, but what a song it is. Teeth is a thrilling journey along the outer fringes of fusion that recalls the work of Frank Zappa. It ranges from explosive to erudite, and encapsulates everything that was wonderful about this version of the Machine. Hugh Hopper’s languid, dreamlike Kings And Queens is a different sort of trip altogether. Wyatt’s drums tumble and crash softly in the background while Elton Dean solos seductively over the entire song. Where the opening “Teeth” might have come from the metaphorical mouth of Zappa, he never would have written something so introspective and calm as “Kings And Queens.” The first side closes with the group’s first composition credited to Elton Dean, the noisy and sometimes terrifying Fletcher’s Blemish. Hellish horns, frightening organ splashes, chittering drums and some bowed bass from future member Roy Babbington end the first side with an unsettling exclamation point.

Side two is dedicated to Virtually, Parts 1-4. Credited to Hopper, it’s not clear to me how much of this was scripted out by Hopper and how much was improvised by the band. There are some sections that seem pretty tight and others that feel pretty loose, often in the same song (e.g., Virtually, Part 2). Hopper’s preference for simple and often melodic patterns (at least on this album) provide a great foundation for soloing, much of it done by Elton Dean, whose playing continues to give the band a harsh edge. The last two parts delve more into amorphous space sounds (another characteristic of Hopper’s compositions) that give the listener a glimpse into what a Tangerine Dream album arranged for a jazz quartet might sound like.

The band’s once-colorful personality blanched with the decision to become a purely instrumental band. That much I think we can all agree on. But their sense of adventure remained intact as they sailed for the uncharted waters of experimental jazz-rock fusion. It’s really a matter of a very talented group of musicians going off in a different direction and, honestly, writing dadaist musical skits wouldn’t have been sustainable anyway. From this point forward, the band would more or less stay on course, adding electric guitars along the way but sailing from point to point with no stomach for mutineers. If that meant no more stunning surprises, it certainly didn’t signal an end of adventures for Soft Machine.