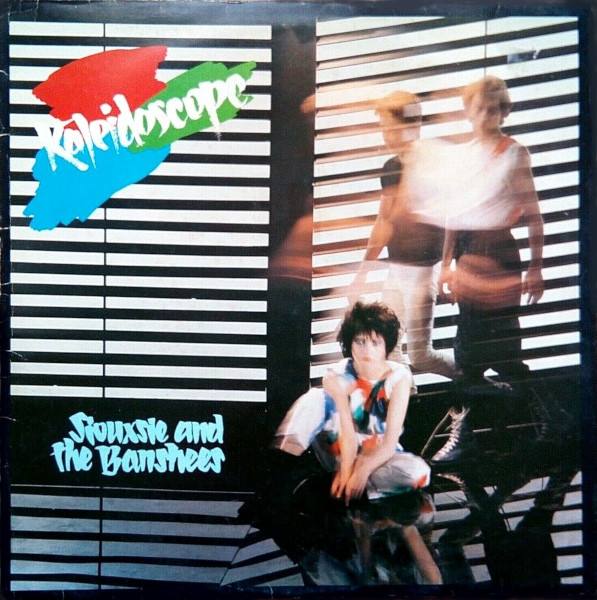 This gothic classic introduced the world to the new lineup of the band featuring Budgie and John McGeoch.

Apparently not taking Join Hands to heart, half the Banshees split after their second album. Instead of crying about it, Siouxsie and the Banshees soldiered on with new recruits Budgie (ex-Slits drummer) and John McGeoch (ex-Magazine guitarist) and released their most successful album to date, Kaleidoscope. It’s a brighter album than their last (it couldn’t have been any darker, right?), though the band still plays from the shadows. The most notable change is the opening of their musical lens to admit elements of light and melody. Siouxsie actually sounds sexy some of the time (versus just plain scary) and the spartan instrumentation of their first two records is now expanded by the multitracking of instruments such as the synthesizer and sitar.

None of the preceding words should be taken to mean that Kaleidoscope is a compromise. The band’s commercial success (“Christine,” “Happy House”) was an aberration that owed much to the band’s alienness (music videos for both tracks gave the songs extra play) and a general unawareness as to how dark these songs really were, dealing as they did with schizophrenia and madness. And yet Siouxsie and the Banshees needed to move beyond the bleak pages of punk’s angry manifesto if they wanted to outlast the post-Pistols punk fascination. By embracing new sounds, exploring more sophisticated textures and playing up the band’s uniquely exotic perspective on punk (“Desert Kisses,” “Paradise Place”), they planted a flag that the burgeoning goth camp could rally around.

Although Kaleidoscope is rightly regarded as a classic album, it’s a transitional work. It’s not their best punk album (their first two albums are more intense) nor is it the fullest expression of their psychedelic/gothic phase, an honor I would accord to their next, Juju. Of course, Siouxsie and the Banshees were a band in transition; they didn’t even have a full-time guitarist at the time of this recording (McGeoch appears on only half the tracks, The Sex Pistols’ Steve Jones guests on a few, The Cure’s Robert Smith had filled in during the previous tour). The marvel of Kaleidoscope is that the band was able to turn their misfortune into fortune and move forward without losing a step.

At the release of Kaleidoscope, Siouxsie and the Banshees were arguably the best gothic/punk band on the planet. The Cure had yet to crystallize their sound, Echo & The Bunnymen barely had one album under their belt and The Damned had already traded in their original teeth for a pair of plastic fangs. As with most of their punk compatriots, Siouxsie and the Banshees softened over time as their musical horizons expanded; a reverent cover of “Dear Prudence” would have been unthinkable in 1980. The band’s visual sensibilities were also rapidly evolving; between the filming of the videos for “Happy House” and “Christine,” Steve Severin and Budgie had dyed their hair blonde (in the style of The Police) and Siouxsie’s makeup had taken on a life of its own. I guess you could say that Kaleidoscope ushered in a more colorful phase for the group on two fronts. Ha ha! (Snortles.)

A1. Happy House
A2. Tenant
A3. Trophy (Siouxsie Sioux/Steve Severin/John McGeoch)
A4. Hybrid
A5. Clockface
A6. Lunar Camel
B1. Christine
B2. Desert Kisses
B3. Red Light
B4. Paradise Place
B5. Skin

All songs written by Siouxsie Sioux and Steve Severin unless noted.

[Review] Siouxsie and The Banshees: A Kiss In The Dreamhouse (1982)