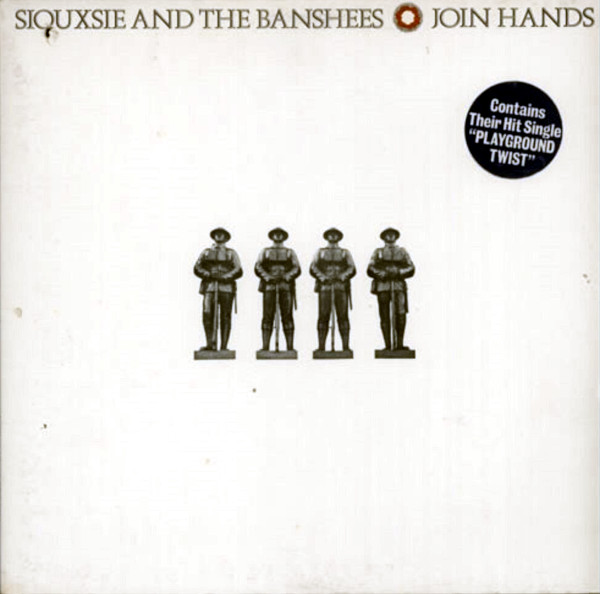 The band’s second is even darker than their first. That’s right, I wrote darker.

Second albums usually suffer from the shortcomings of writing new material quickly, in which case you might see a fourteen-minute version of “The Lords Prayer” as a crutch but, if that’s the case, Siouxsie and The Banshees plainly intend to beat you over the head with said crutch. Join Hands cements Siouxsie’s status as a peerless gothic punk priestess/poetess. No one—not The Cure, not The Damned, not The Clash, not whatever remained of The Pistols—was making music this bleak, bloody and intense. The band is absolutely uncompromising in their vision and yet, God bless their black hearts, English audiences strapped themselves in for the ride and followed the Banshees down the dark, dark corridors of this brutal art gallery.

The album again opens with a stunner, “Poppy Days,” which borrows bits of John McRae’s war poem, “In Flanders Fields,” and immediately turns our attention away from the land of the living and its bright, happy colors. “Regal Zone” is even darker, imagining a torture scene in a kingly court of apathy/duty where brutality is the cost of policy. “Placebo Effect” pictures a young girl at the unfeeling end of uncaring physicians, and you begin to notice a pattern: horrible things happen through people in power and the powerful institutions they wield. As if building up to the fight, Siouxsie and The Banshees tackle the most powerful people/institutions at the end: Mom/Dad and God.

This is the part where I tell you, as a Christian, not to take any of this too seriously. Siouxsie and The Banshees are artists, not philosophers. If God is the enemy, you’re playing for the wrong team. But listening to an album like Join Hands is fascinating in the same way that staring at a surrealist painting is fascinating, because it makes you question your reality and, oftentimes, face the utter banality of its icons. (And, yes, I wait all week to spout pompous nonsense like “face the utter banality of its icons.” I suspect it’s like letting the puss out of a swollen ego. There, that’s more like it.)

As the last album from the original quartet, Join Hands marks the end of the band’s darkest phase. John McKay and Kenny Morris set the template for what would follow—guitars as broken shards of metal nightmares, pounding drums—but the band was less monochromatic in execution after they left the group, for whatever reason. Honestly, it’s unlikely that Siouxsie and The Banshees could have sustained this level of intensity for long. Join Hands is a very intense record. It never relaxes, never admits any trace of warm sunlight in its subterranean world. When “Playground Twist” is the happiest song on your album, you know you’ve entered a dark place.

As with the early Cure albums, Join Hands contains few memorable melodies. The songs are certainly deliberate, the overarching theme clearly a planned construct, and so what emerges is less a collection of their best ideas and more a perfecting of their sound and vision in carefully staged vignettes. It’s not an easy album to rally around any more than Seventeen Seconds or Faith, works that were obviously influenced by The Banshees’ first two records, but it might be the most principled piece of art they’ve ever produced.