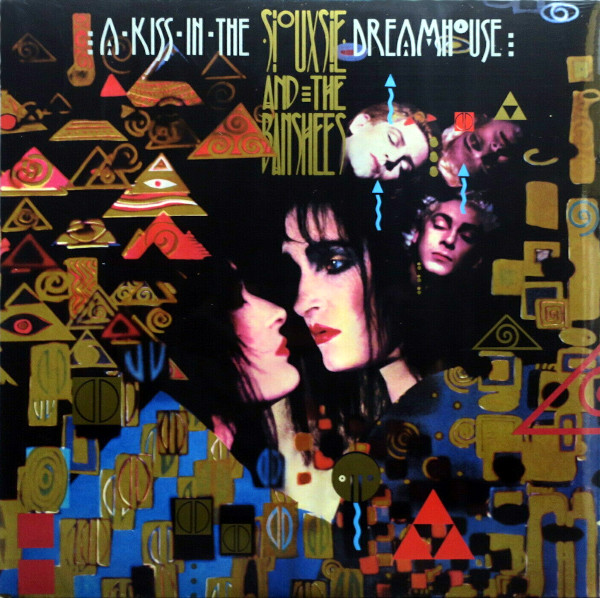 A musically stunning work that stands as one of the greatest and most inventive goth albums ever recorded.

This is the band’s gothic masterpiece. In fact, it may well be the greatest goth album ever recorded, so perfectly does it capture the beauty, brutality and shiny obsidian blackness of gothic’s otherworldly charm. A few years ago, I might have scoffed at the idea of a Siouxsie and The Banshees song with strings, but you’ll welcome every new color that appears on A Kiss in the Dreamhouse. Sell out? Bah! More like a celebration of sound and subconscious and the incestuous nature of the two.

Few bands seem to thrive so well on conflict. Kaleidoscope, which should have been a death rattle, was a revelation. During the creation of Dreamhouse, the Banshees fired their manager and more or less sacked their producer, Nigel Gray, opting to produce the record themselves with engineer Mike Hedges. The sessions were reportedly fueled by drugs and alcohol. Instead of pushing them over the edge, the experimental atmosphere pushed their music to a new level. No two songs on Dreamhouse sound exactly the same, because the sounds they were able to capture in the studio were widely divergent, from strings to circus organs.

“John McGeoch was my favourite guitarist of all time. He was into sound in an almost abstract way. I loved the fact that I could say, “I want this to sound like a horse falling off a cliff,” and he would know exactly what I meant. He was easily, without a shadow of a doubt, the most creative guitarist the Banshees ever had.” – Siouxsie Sioux, as quoted in The Independent, 2004.

There are several things that make this a very different record from Juju. One is the decision to multitrack Siouxsie’s voice on most of the songs. You’ll feel the effects particularly on “Painted Bird,” one of several tracks that I think were unwisely slighted for the role of single. The other is John McGeoch’s interest in keyboards, which take a prominent place on several tracks including “Circle.” But the most important difference is the experimental, collaborative nature of The Banshees and Mike Hedges, who challenge each other to expand their musical vista. The opening three tracks – “Cascade,” “Green Fingers” and “Obsession” – reveal an astounding range of ideas on how the band might present their dark vision. The lyrical imagery is nearly as delicious, with Steve Severin’s contributions nearly overshadowing the drow poetess/priestess herself (just check out the lyrics on Severin’s “Melt!” as an example).

As the last of the albums with McGeoch, Dreamhouse marks the end of the Banshees’ most creative period. It also marks the end of what many could consider goth rock’s earliest peak. How the Banshees didn’t make it big in the U.S. is a mystery to me. Perhaps, like The Cure, they were deemed too dark for our sunny dispositions, but I would tell you that Dreamhouse is their brightest record yet, even if the source of much of that light is ultraviolet.

All songs written and arranged by Siouxsie and The Banshees.

Budgie (drums, percussion, harmonica on B4), John McGeoch (guitar, keyboards on A1/A5/B3, recorder on A2), Steven Severin (bass guitar, organ on B2, 6-string bass on B4), Siouxsie Sioux (all voices, bells on A3) with Caroline Lavelle (cello on A3), Virginia Mewes (violin on A3/B4), Anne Stephenson (violin on A3/B4). Produced by Siouxsie and the Banshees; engineered by Mike Hedges.