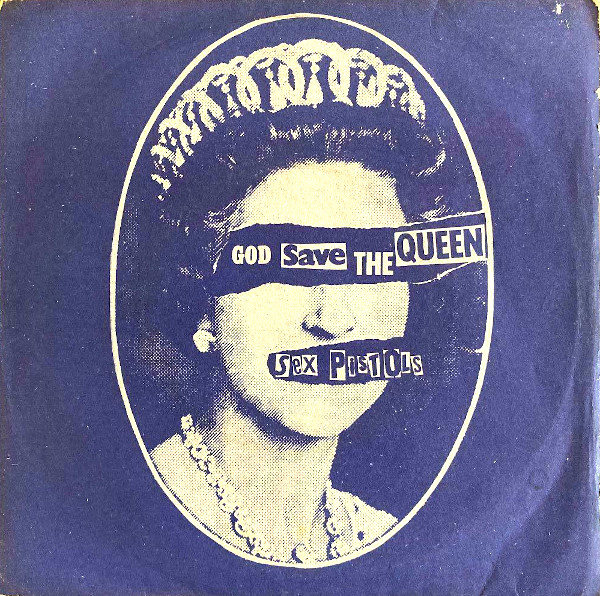 With the revolution begun, Sex Pistols turn their eyes to regicide – or at least the death of the monarchy.

Kronomyth 0.2: The flowers in the dustbin.

Sex Pistols fired the first shot in the October Revolution of rock & roll with “Anarchy in the U.K.” Six months later, they were calling for the Queen’s head. Over the years, John Lydon has backtracked on the idea that God Save the Queen is about Queen Elizabeth, explaining that his ire was directed at monarchies in general. Fortunately for us, the band passed on writing a song called “I reject your antiquated monarchical system” and wrote this one instead.

Glen Matlock first drafted the song on the piano and, yeah, it’s hard not to imagine him just poking at two keys on the piano with one finger. Johnny Rotten (Lydon) wrote the lyrics. By the time the band recorded the song, Matlock was out of the band, and Steve Jones ended up playing the bass on it because Sid Vicious (Matlock’s replacement) was apparently a pretty terrible musician. The song was originally called “No Future,” but was changed to “God Save the Queen” to capitalize on the fact that its release coincided with the 25th anniversary of Queen Elizabeth’s reign.

“God Save the Queen” is three minutes of snarling, kicking thuggery featuring the hijacked rock & roll guitar of Steve Jones, Paul Cook’s energized drumming and Johnny Rotten’s rejection of everything from God to Queen. Like I said, Rotten/Lydon was purportedly trying to make a finer point about the doomed state of monarchical rule, but at the time it felt like a threat to topple down everything sacred. (And you might do well to take with a grain of salt any man whose name begins with a lie.)

The B side is an overlooked gem called Did You No Wrong or, as it was presented on most European singles, “Do You No Wrong.” (Apparently, they didn’t know it was wrong.) Steve Jones again conscripts some old rock & roll riffs into the new punk army, and Lydon delivers another great performance. At one point, Lydon lets out a laugh that sounds for the life of me like Gibby Haynes’ laugh on “Negro Observer.”

A&M has the tijuana brass balls to jerk around the Sex Pistols.

Sex Pistols were briefly signed to A&M, which planned to release “God Save the Queen” in March 1977 and then pulled it. That version featured “No Feeling” on the flip side and today sells for a hefty sum; in 2019, one collector paid 13,000 quid for a copy. I’m not even sure the Pistols made that much money off it.

Shortly after that, Sex Pistols signed with Virgin and the single got a proper release…

Over the years, “God Save the Queen” has been revived as a single, occasionally with the aim of achieving the #1 status denied it on its original release. Conspiracy theorists contend that original sales were underreported to avoid embarrassment to the Queen, leaving Rod Stewart on top of the charts. In an odd bit of karmic queen payback, Stewart would be the subject of a rumor a few years later that he had ingested a bellyful of sailor’s semen, requiring his stomach to be pumped. It was a great time to be alive. Lydon for his part has disavowed the reissues, claiming that he could care less if the single ever makes it to number one.

In 2002, the single was released in an electronic remix by Leftfield’s Neil Barnes. It’s about as dumb as you’d think.

Or just another cuntry…