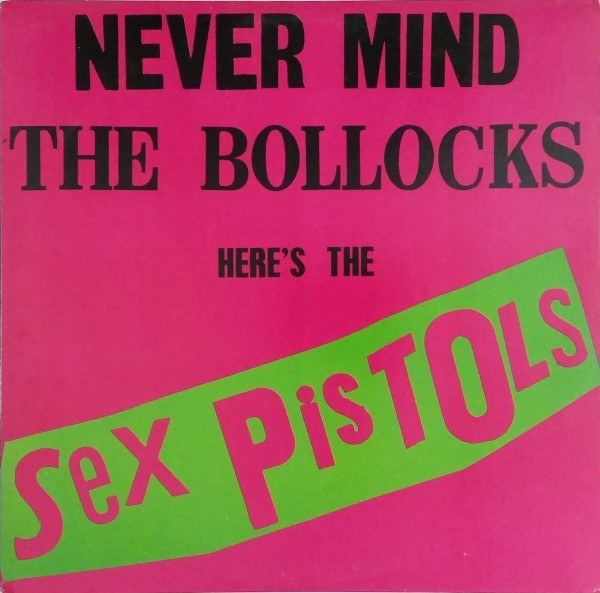 The third-greatest punk album ever recorded, according to Rolling Stone. (Ramones and The Clash, in case you were wondering.)

Kronomyth 1.0: The future was no future.

The Sex Pistols were a hot mess. They only stayed together long enough to make one album, and couldn’t even stay together for that. Glen Matlock, the band’s best songwriter, was out before the album was. His replacement on bass, Sid Vicious, needed a replacement himself (his playing apparently wasn’t up to snuff), so Steve Jones took on the dual roles of guitar and bass, rendering the Pistols essentially a trio. In a state of collapse and chaos, The Sex Pistols recorded one of the greatest rock n’ roll records of all time.

It’s worth noting that Bollocks wasn’t the first shot heard ‘round the world, an event that occurred one year earlier with the release of Anarchy in the U.K. Other shots followed: God Save the Queen, Pretty Vacant, No Feelings (originally titled “No Feeling”). By the release of Bollocks, the Pistols were already a cause celebre. But not everyone bought singles and the radio didn’t play the Pistols, so an album gave the band the perfect delivery mechanism for their revolutionary music.

Any discussion of The Sex Pistols tends to mix hyperbole and history. They were the first punk band, singlehandedly ushering in the moral decline of Western civilization, blah blah blah. In truth, the shock of hearing “Anarchy in the U.K.,” was only slightly more shocking than hearing “My Generation” by The Who or “You Really Got Me” by The Kinks and so on. In other words, the history of rock and roll is one of repeated shocks. Not to take any thunder away from The Sex Pistols, but I wouldn’t want to take any away from Johnny Thunders either in suggesting that the music of The Sex Pistols was created in a vacuum. It was brilliantly packaged and marketed, and expertly produced too. That last point is important, because the Pistols never lost sight of the fact that their music was product; revolutionary product that was swift to capitalize on a burgeoning market for revolutionary ideas, but product nonetheless.

Okay, so enough of my pedantic mincing. Let’s talk about the music. It sounds like rock & roll filtered through a throbbing headache. Steve Jones and Paul Cook play like men on fire and Johnny Rotten sings like one. Rotten is revolting, whether he’s exposing both sides of the abortion argument (Bodies) or rejecting the elemental need for human compassion (“No Feelings,” Problems). It’s nihilism in its purest musical form: your idols are worthless, the world is heartless, the rush of the ruin happening around you is breathless. Yet it’s destruction you can dance to, or try anyway. Sub-Mission, Holidays in the Sun, “Anarchy in the U.K.”… you can’t sit still when they’re playing because the hooks are there, lurking under the broken glass and barbed whining of Mister Rotten.

Suggesting that Never Mind The Bollocks is the embodiment of punk is both true and false. True in the sense that no album has a better claim to call itself a punk record, and false in that the album is only one limb of a greater body of work that would include early albums by The Damned, Ramones, The Clash among others. It’s too bad that the Pistols couldn’t hold it together for longer, but the fact that people are still talking about them forty years on (and probably will keep talking about them for another forty) is a testimony to the timelessness of their music and, I suppose sadly, their message.