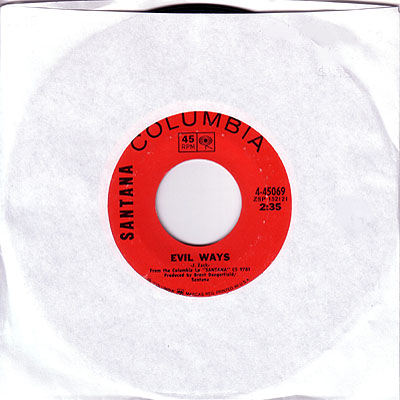 Santana’s smooth version of this Willie Bobo song gave them their first Top 10 single and signaled the beginning of their winning ways.

Oddly, it was “Jingo” and not “Evil Ways” that was selected as the first single from Santana. At the end of the year, an edited version of “Evil Ways” was released and gave Santana their first big hit. Santana’s slick and stylized version of the Willie Bobo song smooths over the original rough edges, lending credence to Carlos Santana’s comments that they were making music for white people. White, brown or blue, it’s a remarkably tight song that succintly packages the Santana sound in (arguably) its most appealing form.

The B side is “Waiting,” the song that led off the set on their seminal Woodstock performance. The studio version isn’t as scintillating as the live version, but at this point any Santana song was a magical invocation of exotic sounds. In the UK, “Jin-Go-La-Ba” was chosen as the B side. Of minor interest, “Evil Ways” was originally and erroneously credited to Jimmie Zack, who had written a much different song called “Evil Ways” many years earlier. This was likely the work of lazy archivists, who simply thumbed through a catalog of songwriters until they found a name that matched, since it’s impossible that Santana didn’t know the source of the song.