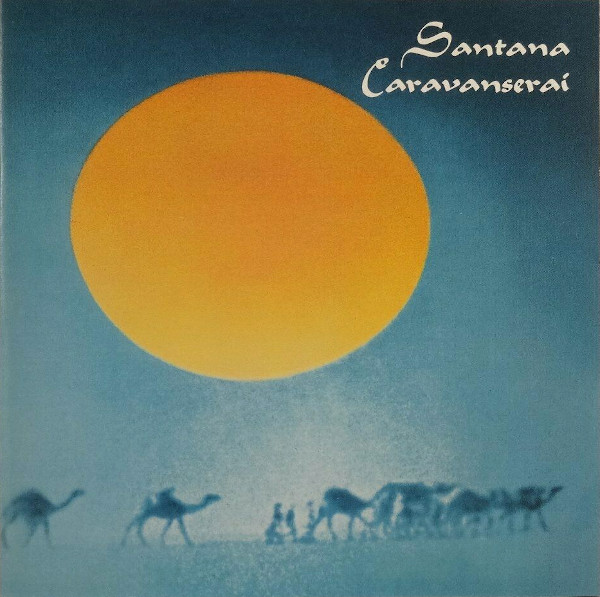 Santana’s fusion aspirations blossom on this brilliant recording, which sounds a lot like Mahavishnu Orchestra.

Kronomyth 4.0: An oasis in the desert of dreams.

This is as close as Santana has come to making a Mahavishnu Orchestra album. If that sounds like I’m limiting Santana’s achievement on Caravanserai, forgive me. Listening to this album is a religious experience. But it is their most atypical album, even as it is probably their best album. Primarily instrumental and featuring an expanded lineup that now included Douglas Rauch and Mingo Lewis, Caravanserai is a classic jazz/rock fusion album that brings all of Santana’s elements together in a new and exciting way.

The album begins with a saxophone and ends with an orchestra; not two sounds you normally associate with Santana. In between, you’ll encounter the percussion-driven workouts (La Fuente del Ritmo) and psychedelic pop songs (All the Love of the Universe) of the past. But you’ll also encounter strange, new creatures on this journey: electronic music mixed with percussion (Future Primitive), noisy rock fusion (Every Step of the Way), spiritual jazz (Eternal Jazz of Reincarnation) and a luminous version of Antonio Carlos Jobim’s Stone Flower.

While I’m not interested in pinning a “best Santana lineup” label on any iteration of the band, it’s hard to imagine a more creative group. Neal Schon was coming into his own as a songwriter, Rauch and Lewis were important new collaborators, and guests such as Tom Rutley and Hadley Caliman make important contributions. The landscape of sound on Caravanserai is broader, its goal much higher than a new hit single. The technical and musical sophistication of songs like Waves Within and Eternal Caravan of Reincarnation go beyond the black mass of Abraxas and reach a higher plane of spiritual consciousness.

Gregg Rolie and Neal Schon would depart after Caravanserai for a different kind of journey. Carlos Santana invited John McLaughlin to play on their next album, Welcome, which went further into the field of fusion and consummated their shared affection for John Coltrane with a guest appearance by Alice Coltrane. Tom Coster, who appears here on one track, Look Up (To See What’s Coming Down), replaced Rolie. For those whose tastes lean toward jazz fusion, Caravanserai is likely where you’ll spend the most time in Santana’s catalog, and would be my top candidate for any Santana entry in a 1001 albums you should hear before you kill yourself list.