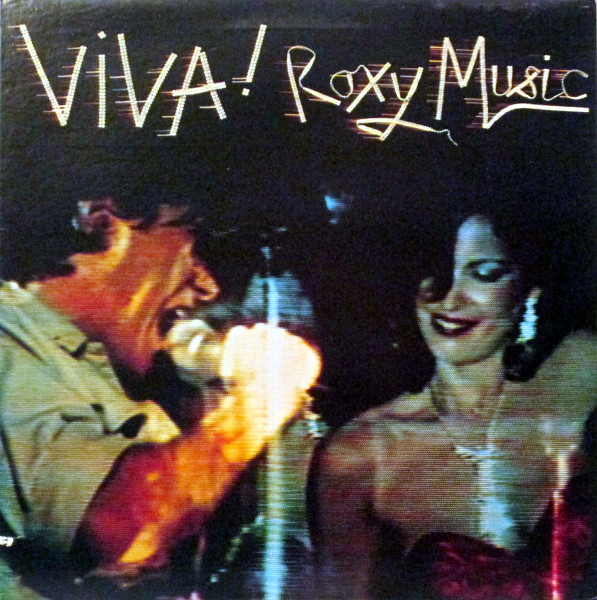 A collection of live performances through the years, siren songs of haunted dreams from the past.

Roxy was dead. Long live Roxy live! In reality, the band wasn’t dead, merely dormant for a few years as its members followed their own pursuits. Viva! Roxy Music is a souvenir of the band’s magnificent rise and stall, featuring live performances from the post-Eno incarnation of the group up to the recent Siren tour. The album showcases excellent choices from their catalog, as well as three (!) “new” bass players— John Wetton, Sal Maida and Rick Wills—none of whom presumably exploded on stage.

It kicks off with Out of the Blue, one of my favorites from my favorite Roxy Music album, Country Life. The band captures the spooky, sexy vibe of the original and Eddie Jobson gets in a nice violin solo at the end. The band teases their next selection, Pyjamarama, which is slightly slower than the original but still a joy to hear. The Bogus Man continues the awesome parade of classic cuts, this time with Bryan Ferry taking a few more chances on the vocals. In keeping with the riskier side of Roxy, Chance Meeting makes an unexpected appearance. The first side closes with their latest single, Both Ends Burning, which sticks close to the familiar elpee version.

An epic version of If There Is Something took me by complete surprise. Solos from Phil Manzanera and Jobson keep things interesting, but it’s not something I expected to hear during a Roxy Music concert, and certainly not at almost double its original length. Better by far is a powerful version of In Every Dream Home a Heartache. Now this they could have played for ten minutes with no complaint from me. The closing Do the Strand is set up as the album’s encore, ending with an ominous echo.

The performances on Viva! Roxy Music are uniformly good despite the different venues and a bevy of bass players, different than the originals but not too different. Of course, a 50-minute Roxy Music concert is something of a gyp, but this record was obviously intended more as a contractual obligation than an accurate concert document. The song selection had to please longtime fans, the performances shouldn’t have displeased anyone and nobody but a horrible ogre could begrudge the world another Roxy Music album, even if it was just a posthumous concert sampler.

Original 8-track version
A1. Out of the Blue
A2. The Bogus Man
B1. Pyjamarama
B2. Chance Meeting
B3. Both Ends Burning
C1. In Every Dream Home a Heartache
C2. Do the Strand
D1. If There Is Something