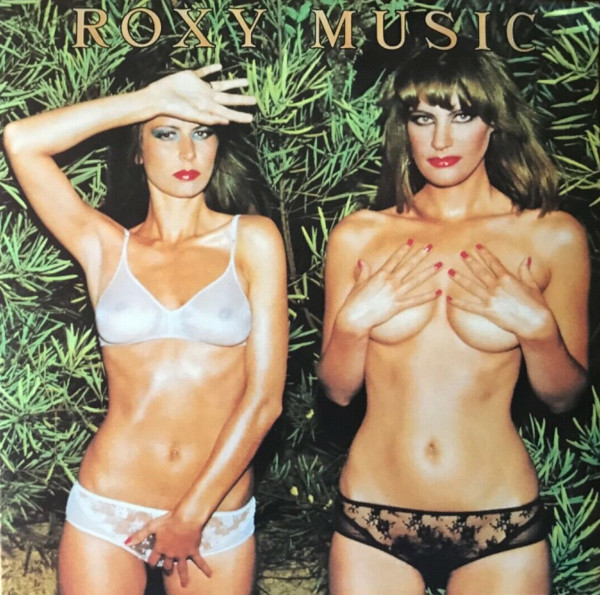 Blah, blah, blah… you’re not even reading this, are you?

Welcome to the crown jewels in Roxy Music’s family of femme fatales. In the US, unfortunately, prudish interests prevailed and the ladies soon dematerialized, leaving in their wake the unsatisfactory scenery below (an inverted image of the back cover). Fortunately, the censors didn’t mess with the music. Song for song, this is as good as Roxy gets.

Country Life finds the band at a stylistic crossroads, embracing shorter, lyrical songs while retaining the dark and challenging tone of their earlier work. It’s not so much different than Stranded, which also featured rocket-propelled pop music alongside torch songs that twisted like a slow, sharp knife. Critics fell in love with Siren’s song, but that album was never dark enough for my tastes. Nothing on Siren was as sublime as the pairing of All I Want Is You and Out of the Blue, or as frightening as the succession of Bitter-Sweet, Triptych and Casanova.

The album opens with The Thrill Of It All, which would be stripped down and re-cast as “Love Is The Drug” on their next album. What follows is a varied sampler of settings: romantic and dreamy art rock (“Out of the Blue”), a fine approximation of Bob Ezrin’s Teutonic dramas (“Bitter-Sweet”), a masterful stare-down from Bryan Ferry (“Casanova”) and more. Maybe Siren tried too hard; Country Life burns with a cool fire, the beneficiary of the band’s and John Punter’s even-handed production. Ferry’s stilted vocals, wafting on a swirling cloud of sounds, restlessly and breathlessly move across genres, from cabaret to country. Only Ferry could make “oy vey” sound sexy.

Although the band’s idiom was well established by now, there are new wrinkles in the music. Ferry for example, seems to have taken harmonica lessons since Stranded, which pay for themself on Three and Nine and If It Takes All Night (one of two quasi-country songs on the album, the other being the unhinged Prairie Rose). Eddie Jobson has also settled nicely into the band, now comfortable conjuring the ghost of Eno (“In Every Dream Home A Heartache”) on “Out of the Blue.” Andy Mackay also deserves a special shout-out for setting the mood perfectly on songs like “The Thrill of It All” and “Out of the Blue,” while Phil Manzanera delivers arguably his best (albeit too brief) guitar solo on “All I Want Is You” (for my money the best song on the album).

Country Life is, for me, the fulcrum on which the first and second halves of Roxy Music rest. For this reason, it’s probably my favorite album from them. It seems a perfect mix of sweet and bittersweet, joie de vivre and weltschmerz, a transcontinental collection of exotic confections that excites my musical tastebuds every time I hear it.