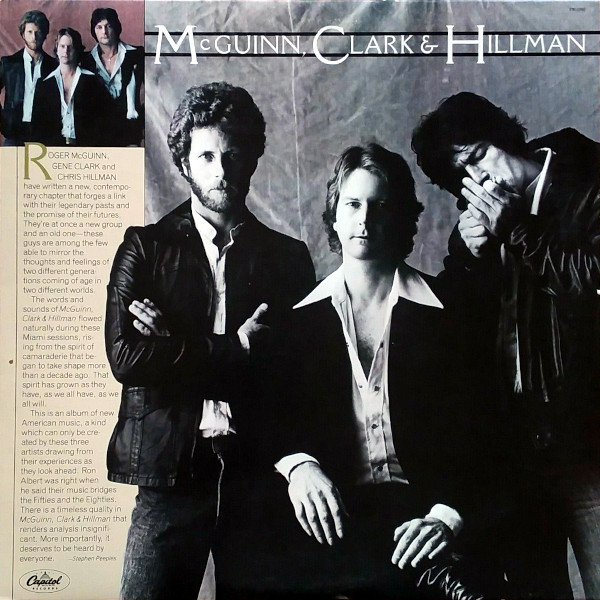 Whatever happened to The Byrds? Disco, apparently.

This was actually my first adventure in byrding, having netted it for “Don’t You Write Her Off,” then releasing it, then capturing it anew in a used record store. (The great cycle of something, I suppose.) It caused a small stir at the time and contained three wonderful tracks: “Long Long Time,” “Don’t You Write Her Off” and “Surrender To Me.” These songs are representative of what was right about the ‘70s soft rock movement. The rest of the album flirts with disco, adopting the city-slicker-in-cowboy-boots stance of Eagles and others.

Honestly, the album begins to fall apart after “Surrender To Me,” though the closing “Bye Bye, Baby” is an awfully pretty ballad. Like the CS&N alliances, the three songwriters came to this project as individuals, choosing to write with outside collaborators rather than each other. Where they meet is in the harmonies, though even here other artists cloud the picture. That the trio couldn’t came up with better material is a bit disappointing, but that they left any kind of keepsake behind is a plus.

This isn’t The Byrds in their natural setting; those days were gone. The unnecessary plug from Stephen Peeples on the cover and the staged cover photography smell of desperation. In fact, I’d rate this as some of the worst album packaging of all time. What’s inside is occasionally very good, especially the opening four cuts, which compare favorably to Bob Welch, Eagles et cetera. Still, the world needed The Byrds, not more songs about groupies, man-eating women and soured relationships. At some point in your life, you should hear “Long Long Time,” “Don’t You Write Her Off” and “Surrender To Me.” The rest of this record you can live without.