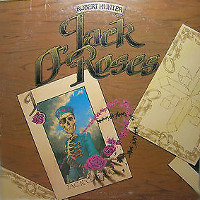 Kronomyth 3.0: THE LONE HUNTER. This is a true solo album: Robert Hunter singing and strumming on his lonesome in a London studio. Jack O’ Roses didn’t get a wide release and will cost you some coin today to acquire, which is a shame, since it’s an album that more people should hear. I’ll admit to being less than jazzed about the idea of Hunter without any help, but it turns out that he’s been honing his craft over the years. His vocals have rarely sounded so smooth (the Johnny Cash comparisons actually hold water this time) and he strums that guitar just fine. It’s interesting to hear Hunter’s interpretations of Dead classics such as “Box of Rain,” “Friend of the Devil” and “Reuben And Cérise,” but the real revelation occurs on the “Terrapin” suite. Here, Hunter has restored some lyrics that link it back to the “Lady of Carlisle” (via the Jack O’Roses) and presents the entire piece as a cleverly stitched story that bears a striking resemblance to Jethro Tull’s “Baker St. Muse” in spots. Truth be told, I expected this album to be a vanity project. Instead, it makes a compelling case for Robert Hunter as a solo artist; I’d pay to hear him after hearing this. Given simple adornment, the lyrics shine. More importantly, Hunter finally gets his say as to how these songs should be presented. It’s strange that Jack O’Roses hasn’t been re-issued on compact disc yet, especially in lieu of the endless archival releases that have been preserved in the digital domain. Once you’ve heard it, you won’t hear Hunter or these songs in the same light again.

(On the UK elpee, the songwriting credits for A1/A2 are mistakenly switched.)

The Pictures
Artwork by Trevor Wright. Photograph by Roy Wilbraham.