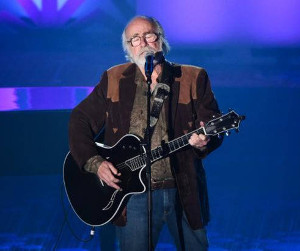 Before the rise of the Dead, Hunter and Jerry Garcia played together in a band in the 60s. For the Dead’s third studio album, Aoxomoxoa, Hunter was tapped to provide the lyrics, and the rest is musical history. Hunter continued to collaborate as a songwriter with the Dead (primarily Garcia) for the rest of the way, and is rightly regarded as a member of the band. His lyrics, rich with epigrammatic wisdom, have few equals in the American songbook; a folksy Bob Dylan might be the closest comparison.

During the Dead’s mid 70s hiatus, Hunter released his first solo album, Tales of the Great Rum Runners. It featured members of the Dead, with Hunter playing guitar and singing in a serviceable voice that suggested a cross between Bob Dylan and Johnny Cash. He followed it up with Tiger Rose, again featuring members of the Dead. “It Must Have Been The Roses,” from his first album, has since become a staple in the Deadshow.

Hunter continued to release new albums throughout the 80s to a loyal cadre of fans, most of them Deadheads. In the late 80s, he collaborated with Bob Dylan on two songs for Down In The Groove. In 1994, he was inducted into the Rock and Roll Hall of Fame along with the other members of the Grateful Dead.

PROMONTORY RIDER: A RETROSPECTIVE COLLECTION (1982)
Boys In The Barroom / That Train Don’t Run Here Anymore / Tiger Rose / Hooker’s Ball / Standing At Your Door / Promontory Rider // Touch of Darkness / It Must Have Been The Roses / Rum Runners / Drunkard’s Carole / The Lady of Carlisle / Prodigal Town. Compilation released on elpee, gold vinyl elpee and picture disc elpee and cassette in 1982 in the US (Relix, RRLP/RRLP-C-2002). Re-issued on compact disc in 1989 in the US (Relix, RRCD-2002). Re-released on CD (Castle, CCR-110).

FRIEND OF THE DEVIL (2016)
Live tracks: Rose of Sharon / Rum Runners / Tiger Rose / Battle of New Orleans / Must Have Been The Roses / Wild Bill / Let Me Go (Out Into The Valley) / Keys To The Rain / Cruel White Water / Last Flash of Rock And Roll / Talking Money Tree / Friend of the Devil / Boys In The Barroom / That Train. Live album credited to Robert Hunter & Comfort recorded in 1978 and released on compact disc on January 15, 2016 (Echo, ECHOCD2066).