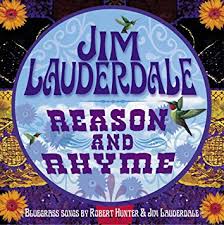 Kronomyth x.x: THE HUNTER AND THE HAUNTED. I don’t give a hang for country/bluegrass music. It’s not meant as a judgment, but my musical experiences belong at the other spectrum: punk, classical, prog. The few country albums I have encountered exist at the crossroads of rock and country, through Dylan or the Dead or (I kid you not) Elvis Costello. So my opinion on the matter of Jim Lauderdale’s music has marginal value at best. I borrowed a copy of Reason and Rhyme solely for the Dead affiliation, expecting something along the lines of latter-day New Riders. It’s better than that. Lauderdale has a good voice, an ear for minor-key melodies and harmonies, a top-notch cast of players behind him and, of course, a wordsmith of no little weight on his side. Robert Hunter and Lauderdale have collaborated on a handful of albums over the years, with Reason and Rhyme falling somewhere in the middle in terms of time. Whether it’s the best of those pairings, I couldn’t say. I can tell you that it exceeded my expectations, although I expected more from Hunter and less from Lauderdale, so take that as you will. Highlights to my mind include “Jack Dempsey’s Crown,” “Cruel Wind and Rain,” “Don’t Tempt The Devil (With Your Love)” and “Janis Jones.” I don’t know enough about modern bluegrass music to tell you where this fits in the family of blue, whether it’s navy or teal, azure or indigo. I do know that it moves at a brisk pace, the picking and playing are superb, and I like Jim Lauderdale’s voice. Missing from this are the compelling narratives of Hunter; “Love’s Voice” is a missed opportunity, “Not Let You Go” has shadows that might have been more deeply explored, “Don’t Give A Hang” is as curmudgeonly as it is clever. In other words, if you’re coming here to explore the lyrical riches of Robert Hunter’s mind, they’ve been better mined elsewhere. If you are thinking of deeply exploring the New Riders or other avenues of the ancillary dead, however, I would suggest at least a brief stop in the dells of Lauderdale, with the caveat that you might be tempted to linger there longer than you expected.

All songs written by Robert Hunter and Jim Lauderdale.

The Product
Released on CD on June 21, 2011 in the US (Sugar Hill, SUG-CD-4070). Photography by Anthony Scarlati, illustration elements by Tim Truman, design by Gina R. Binkley.