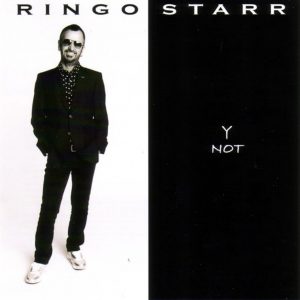 Kronomyth 26.0: NOT BAA’D. Sixty-nine. Ringo is 69 years old and still making new music, trying new things and collaborating with new people. Which is pretty amazing, right? And worth remembering, because Y Not may not strike you as an amazing record on the first few spins, but you shouldn’t lose sight of the fact that it’s an amazing feat. It’s the first Ringo record since Time Takes Time that doesn’t feature the full-time participation of Mark Hudson (Roundheads Steve Dudas and Gary Burr are still around), which worried me initially since Mark was a HUGE part of Ringo’s resurgence. Liverpool 8 was completed without him and proved he could finish a good album without Mark, but Ringo had to rebuild much of his band from scratch. With Los Angeles as his base, Ringo reached out to anyone passing through who wanted to play along and managed to grab Sir Paul, brother-in-law Joe Walsh, Dave Stewart, Joss Stone, Ben Harper, Edgar Winter, Gary Wright, Benmont Tench, Don Was, Richard Marx and many others. Some of the collaborations are interesting, from celtic ballads (“Walk With You”) to space-lounge-jazz (“Time”). Just as many miss their mark, notably the angry opener (Ringo should have just covered David Bowie’s “Scary Monsters”), the hastily conceived title track (bad/sad end-rhyme alert) and the closer “Who’s Your Daddy” (a Joss Stone song renting space on a Ringo album). It’s oddly reassuring that a Ringo record should have flaws, since I was beginning to think my critical eye toward the man had been blinded by The Beatles, seeing as how I’ve really enjoyed his last four or five efforts. And there are signs here that maybe Ringo should give it a rest, from the short runtime (under 40 minutes) to the retreading of familiar ground (“The Other Side of Liverpool,” “Peace Dream,” “Can’t Do It Wrong”). There is still a place in the market, on the talk-show circuit and, yes, in our hearts for another Paul McCartney or Ringo Starr record, if only to remind us that rock and roll will never die, nor will it retire to the country to raise sheep. Yet Y Not raises as many questions as answers about Ringo’s future, attempting to re-create Liverpool 8 without the full-time support of Mark Hudson or Dave Stewart and only partially succeeding, suggesting that without a lot of help from the right friends, there may be too little fuel left in Ringo’s tank to get him over the next hill.