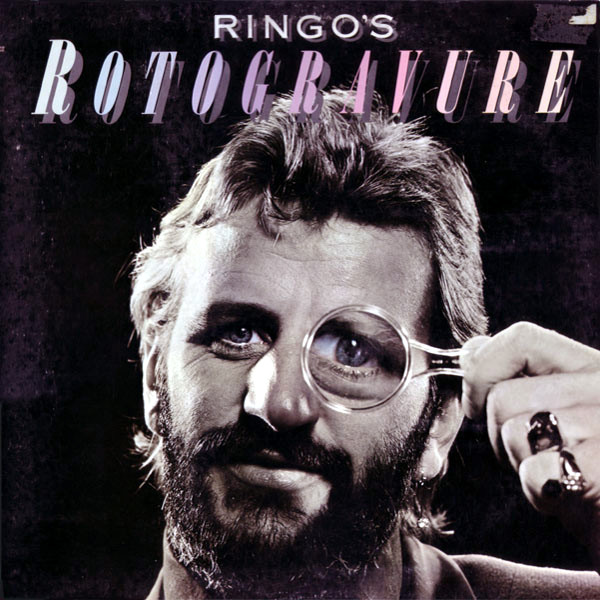 Ringo’s last two records sounded like non-stop parties. This time, he invited the right people but they brought all the wrong things.

Kronomyth 6.0: The writing on the wall.

At first glance, Ringo’s Rotogravure had all the ingredients for another hit album: contributions from John Lennon, Paul McCartney, George Harrison and Eric Clapton, a readymade hit (“A Dose of Rock ‘N’ Roll”), another golden oldie (the Lennon favorite, “Hey Baby”) and a little help from a lot of friends including Peter Frampton and the Brecker brothers. On closer inspection, however, Rotogravure was a weak copy of Ringo Starr’s last two records. The trouble rests squarely with Ringo, who hands in a performance so perfunctory it would make Krusty the Clown blush.

In what could be perceived as a vampiric move, Ringo robs Ring o’Records artist Carl Grossman of “A Dose of Rock ‘N’ Roll” and contributes three songs, one of them co-written with his girlfriend at the time (Nancy Andrews), none of them any good. His version of “Hey Baby” is cold-bloodedly bad. And what Ringo did to Harrison’s “I’ll Still Love You,” a leftover from the fertile All Things Must Pass sessions, is a crime; no wonder George later sued him over it. Then there’s the left-it-unnamed-and-didn’t-even-bother-to-use-good-grammar “This Be Called A Song” from Clapton, which at least is not (because it could not possibly be) as bad as it sounds. On the brighter side of things, Lennon’s “Cookin’ In The Kitchen of Love” is a treat and Paul McCartney’s “Pure Gold” makes for a nice trinket. As the last of the Ringo records to feature The Beatles, Ringo’s Rotogravure will still hold appeal for collectors, although it’s clearly the weakest of the three.