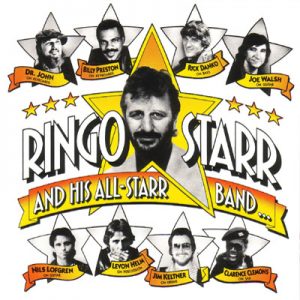 Kronomyth 12.0: NIGHT OF A HUNDRED STARRS. In 1989, Ringo hit the road as the head of an oldies revue featuring friends and acquaintances that included Joe Walsh, Jim Keltner, Dr. John, Billy Preston, Rick Danko and Levon Helm from The Band and Clarence Clemons and Nils Lofgren from the E Street Band. It’s a neat idea that enabled Ringo to tour throughout the 90s (the band would change over time), since hearing Ringo sing over the course of an entire evening might be, well, taxing for most people. In this venue, Ringo is the emcee and the main attraction, getting about one-third of the stage time with his various hits from the 70s and Beatles songs on which he handled the original lead vocals  (e.g., “Yellow Submarine,” “With A Little Help From My Friends,” “Honey Don’t.”) Although an ad-hoc band like this is a little sprawling (think those Rock and Roll Hall of Fame get-togethers at the end), they generated plenty of energy on stage. No doubt everyone had their eye on their own heroes, whether it was Joe Walsh appropriating a track from the Eagles (“Life In The Fast Lane” made it onto the first CD) or Levon Helm singing classics from The Band like “The Weight.” It may look like county fair fare on the surface, but Ringo Starr and His All-Starr Band is really part ‘70s celebration and part testament to Ringo’s enduring star power. At the heart of Ringo’s music, in the studio and on stage, is the help he gets from his friends. Thus, this “night of a hundred stars” approach is in many ways the most natural setting for Ringo Starr. Note that the original CD was also optionally packaged with an extra CDEP featuring four tracks (including “Act Naturally” and Walsh’s “Rocky Mountain Way”). Unfortunately, no one has thought to reissue this disc as an expanded 2CD set that captured their typical 20+ song setlist.