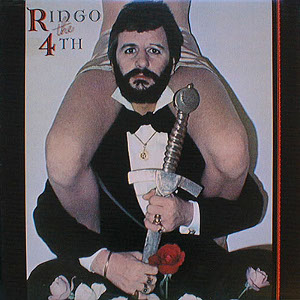 Kronomyth 7.0: ROYAL FLUSH. Ringo’s recording career deserved to be taken seriously, but was the world ready to accept Ringo as a serious musical artist? This is the question that Ringo the 4th asked. The answer, in case you’re wondering, is 162. Gone are the boozy covers, the Beatles and the humble humor that made his previous albums so endearing. In their stead is a professional studio band, top-notch production from Arif Mardin and Ringo’s now-emphatic (if slightly grim) delivery. But where’s lovable old Ringo in all this? “Drowning In The Sea of Love” is dire, disco and definitely not what Ringo’s legions had come to expect from the author of “A Dose of Rock ‘n’ Roll” and “Oh My My.” Without a likeable single to latch on to, drown is exactly what Ringo the 4th did, becoming his first album not to enter the US Top 100. In its defense (and I can’t help myself), the album isn’t that much worse than Rotogravure. There’s nothing on Ringo the 4th as infectious as “Cookin’ (In The Kitchen of Love),” nothing as awful as “I’ll Still Love You.” Meanwhile, Ringo the songwriter emerges more clearly this time, gaining credibility with a 60/40 split (in concert with Vini Poncia) that shows the man was capable of writing an album’s worth of material (although not a particularly good album). Yet without a tasty morsel like “Photograph” or “A Dose of Rock ‘n’ Roll” to tease them, music listeners weren’t going to buy a Ringo Starr album that had nothing to do with The Beatles. I was going to tell you that if you’d already bought Yoko Ono’s Seasons of Glass and It’s Alright, that Ringo the 4th wasn’t any worse but, really, you’ve probably suffered enough, so best to just skip this one.

All songs written by Richard Starkey and Vini Poncia unless noted.

* The 8-track featured a different track listing as follows: Drowning In The Sea of Love / Sneaking Sally Through The Alley // Out On The Streets / Gave It All Up // Wings / Tango All Night / Gypsies In Flight // Can She Do It Like She Dances / It’s No Secret / Simple Love Song.

The Pictures
Cover and liner photography by Nancy Andrews. Design by Kosh.