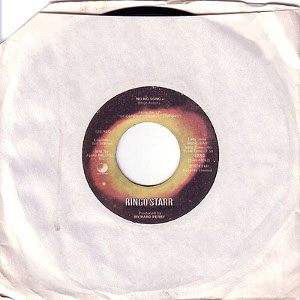 Kronomyth 4.1: DOUBLE RUBBLE. If you thought Beatlemania ended with The Beatles, nuh-uh. In the opening weeks of 1975, John (#9 Dream”), Paul (“Junior’s Farm), George (“Dark Horse”) and Ringo (“Only You”) were still firmly entrenched in the US Top 20. And the #1 single? Why, Elton John’s “Lucy In The Sky With Diamonds” of course. Surprisingly, it was Ringo who struck gold again with “No No Song” and Elton’s “Snookeroo” on the flip side. Guess you could say it was a mix of Beatlemania and Eltonmania at work there. Written by Hoyt Axton, “No No Song” could be construed as an anti-drug song I suppose; Axton’s own version seems to take a stand against drugs by politely refusing to take a toke, whereas Ringo’s version is more tongue in cheek (e.g., “And he wasn’t joking”). In 1988, Starr went into rehab with his second wife, the acktress Barbara Bach. The following year, Ringo’s son Jason was fined for drug possession. Guess they didn’t have a copy of Goodnight Vienna in the house.

Back-to-Back Hits 7-inch single reissue
A1. No No Song
B1. Oh My My