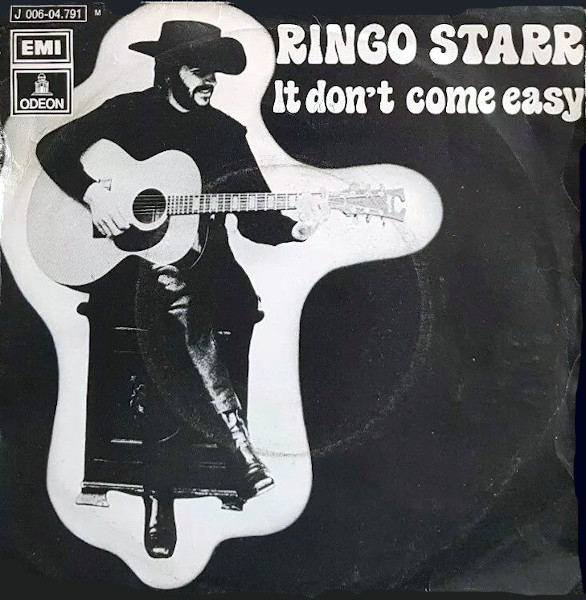 With a little help from George, Ringo throws his cowboy hat into the rockstar ring and scores an intercontinental Top 10 hit.

After two noncommercial albums, Ringo released the single “It Don’t Come Easy,” the first sign that Ringo might have the makings of a rock star. Adopting a sound that borrowed heavily from George Harrison’s solo work, the song introduced what would come to be called “boogaloo,” rock songs with horn charts and a large, loose cast of players that suggested a party with a microphone in the middle. Not for nothing, it was also one of the most fully realized songs that Ringo has ever written, featuring George Harrison on guitar and Ringo himself playing the drums as well as singing.

The flip side finds Ringo in the familiar role of country bumpkin, reprising his turn on “Act Naturally” with an open invitation to the rest of The Beatles on “Early 1970.” The pokes at Paul, John and George (as well as himself) are good-natured, and happily the invitation was accepted by all three during Ringo’s solo career (George was already on board).

Originally a sought-after single, both tracks were later included on the greatest hits compilation Blast From Your Past and, in 1991, the expanded reissue of Ringo. It appears the single was re-released through the ‘70s and ‘80s, a fact I know only through the tireless work of Tim Neely, whose 45 rpm Record Guide is filled with goodies like this. (And, yes, I will scan the labels one of these days so you can track your vinyl through the ages.)